Founded by Louis Cartier in Paris 1847, Cartier has firmly positioned itself over nearly two centuries as the one of the world's most prestigious designers and manufacturers of jewelry, supplying royals, aristocracy, and stylish icons alike. 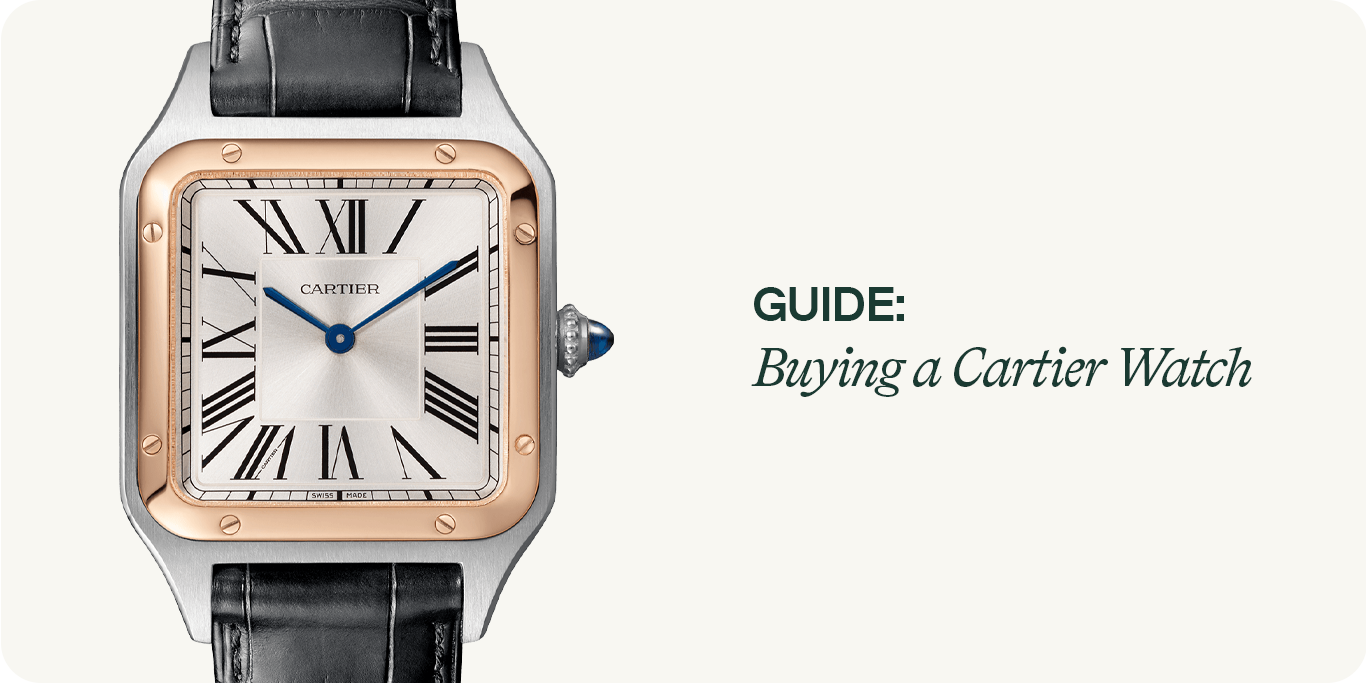 Founded by Louis Cartier in Paris 1847, Cartier has firmly positioned itself over nearly two centuries as the one of the world's most prestigious designers and manufacturers of jewelry, supplying royals, aristocracy, and stylish icons alike. After establishing an unmistakably timeless and elegant design language in the realm of jewelry, Cartier's offerings naturally evolved to include luxury watches, through the introduction of what many see as the world's first true wristwatch.

Designed in 1904, Louis Cartier drew from his experience in jewelry to create the original wristwatch for early aviators. Officially released in 1911, the Santos de Cartier was a truly historic, pioneering design, and while succeeding such a breakthrough is no easy task, Cartier rose to the occasion like no other, releasing yet another game-changing piece in 1918, just as the wristwatch's prominence was intensifying.

Through the release of the Tank, Cartier furthered their involvement in the watchmaking industry while also furthering their relevance in luxury as a whole, as something of a must-have phenomenon amongst the who's who of the era. With its endlessly adaptable aesthetic, as elegant as the day is long, the Tank quickly became produced in countless variations, each instantly recognizable as a Tank, albeit discernibly individual in exciting and tasteful ways. Collectors and historians agree that the Tank is largely responsible for the widespread popularity of wristwatches as a whole, affording both the Tank and Cartier a nothing if not significant role in the history of horology.

As the brand's efforts in watchmaking were furthered, Cartier evolved to include more accessible offerings in their catalog, many of which made use of quartz movements as the highly accurate technology emerged during the 1970s. This contrasts the brand's efforts in recent years to develop mechanical in-house movements, which the watchmaker began producing in 2005. Though high jewelry and haute horology have grown to play a greater role in Cartier's watch offerings, the brand still approaches their accessible offerings with an innovative touch, through advanced quartz movements, including solar-powered calibers.

If you've been considering adding a Cartier watch to your collection, you'll want to keep reading for a considered guide to the most celebrated models in Cartier's watch catalog.

As mentioned earlier, the Santos de Cartier's story begins in 1904, when Louis Cartier designed what is arguably the world's first modern men's wristwatch for his Brazilian friend, the aeronautical pioneer Alberto Santos-Dumont. Allowing the daring pilot to quickly check the time by glancing down at the dial's roman numerals, what began as a one-off quickly evolved into an entire collection of watches, aptly called Santos Dumont. In 1978, the collection would simply become known as the Santos, with the introduction of the famed steel and gold model fitted to a matching bracelet, complete with screw accents.

Since the introduction of the now iconic pilot's watch, all Santos models have featured a square case adorned with a bezel secured using a series of screws, along with a crown accented by a sapphire cabochon. Like the original model, most executions of the Santos throughout history have featured a Roman numeral-clad dial, which Cartier often hides their brand name in the numeral at seven o'clock.

Just like other lines of luxury Cartier watches, the brand produces the Santos model with both mechanical and quartz movements, offering flexibility if you don't wish to worry about keeping your watch wound. Similarly Cartier offers the Santos de Cartier and Santos Dumont models in a number of different case materials, including stainless steel, two-tone steel and gold, and a number of different precious metal cases, including those produced using rose gold and yellow gold.

Arguably the most recognizable of all Cartier watches, not to mention one of the most celebrated dress watches of all time, the Tank debuted in 1918, and was met with a great deal of enthusiasm by collectors. Inspired by the rectangular shape of the military tanks used in WWI, few other watches have enjoyed a history as rich, with a seemingly endless list of famous names known for wearing these Cartier watches. Unlike the Santos which preceded it, the Tank watches feature a straighter case shape, with lugs that stay in line with the case's extremities, affording a uniform, minimalist appearance on the wrist.

Similar to the Santos, the Tank has been produced in a number of different variants over the years. With so many different iterations to choose from, each boasting its own signature style while still being instantly recognizable as a Tank, there's truly a Tank for every collector, and the opportunity to build a collection solely consisting of Cartier Tank watches. The lineage begins with the standard Tank, or "Tank Normale," which was followed by the Tank Louis –  named for Louis Cartier himself.

In the years that followed the introduction of these watches, the luxury watch and jewelry brand proceeded to introduce models including the longer cased Tank Allongée, the Tank Américaine, and the Tank Cintree, each distinguished by subtly different case shapes affording individuality. As watches fitted to metal bracelets rose to prominence, Cartier also responded through the introduction of the Tank Française watches, which were finished to the brand's extremely high, exacting standards.

Perhaps the most pivotal development in the lineage of this Cartier timepiece collection in recent years is the Cartier Tank MC, featuring an in house mechanical movement developed exclusively for Cartier watches. With a great deal of wrist presence, it is larger than most other Tank offerings, though this is a product of its more recent introduction, and the modern tastes Cartier sought to address with these watches.

Given the brand's mastery of both precious metals and high end watches, Cartier quickly developed an international appeal, producing jewelry and watches for the most discerning clientele. This renown stretched as far as Morocco, where the Pasha of Marrakech commissioned a unique watch from Louis Cartier, at some point between 1931 and 1932. Given the Pasha's active lifestyle, water resistance and durability were a must, resulting in the watch being fitted with a canteen-style round crown guard, studded T-lugs, and a cage-like metal grid protecting the crystal and dial of the Cartier watch.

Despite its rugged appointments, the Cartier watch was decidedly elegant, and eventually served as inspiration for an entire collection of watches aptly known as Pasha de Cartier. Introduced in 1985, the Pasha collection's design was overseen by none other than Gerald Genta, the famed watch designer responsible for not only the Patek Philippe Nautilus, but also Audemars Piguet's Royal Oak.

As you probably guessed, the Panthère de Cartier draws inspiration from panthers, which have played a significant role in the brand's history. This animal influence can be traced all the way back to 1914, when Louis Cartier commissioned a George Barbier painting, titled Lady with a Panther. Following this, Cartier's obsession with the large jungle cats manifested itself in the form of jewelry designs celebrating the figure of the panther, including necklaces, bracelets, and rings.

In 1983, Cartier took their panther obsession one step further through the introduction of the Panthère de Cartier, an all new collection of watches inspired by both panthers and the panther-inspired jewelry the brand became renowned for producing. First popular amongst men, the Panthère initially attracted the likes of Pierce Brosnan, Keith Richards, and Charlie Sheen's character in Wall Street, but it would later become most popular amongst female collectors. Today, the watch has taken on a new status as the "it-girl watch," worn by the likes of Bella Hadid, Dua Lipa, Sienna Miller, and Zendaya, to name a few.

First introduced in 2007, the Ballon Bleu de Cartier exists as one of the most modern icons in the Cartier watchmaking catalogue, and follows in the tradition of other celebrated Cartier watches enjoying unisex appeal. With a case shape reminiscent of a pebble, rounded over years of tumbling in the wild, this Cartier watch is extremely comfortable on the wrist. It's also distinguished by its unique rounded crown guard, which surrounds the cabochon-topped crown while still allowing easy adjustment.

The Ballon Bleu de Cartier is definitely one of the bolder designs in the catalog, though that's not to say this Cartier timepiece doesn't share DNA with other celebrated models from the brand. Like other Cartier watches, the Ballon Bleu de Cartier features fine dial engraving, along with the legendary Art Deco dial design found on other models, finished with Roman numerals.