We've all heard the story of how Audemars Piguet's famous Royal Oak came to be, but have you found yourself wondering about the story of the Royal Oak Offshore? 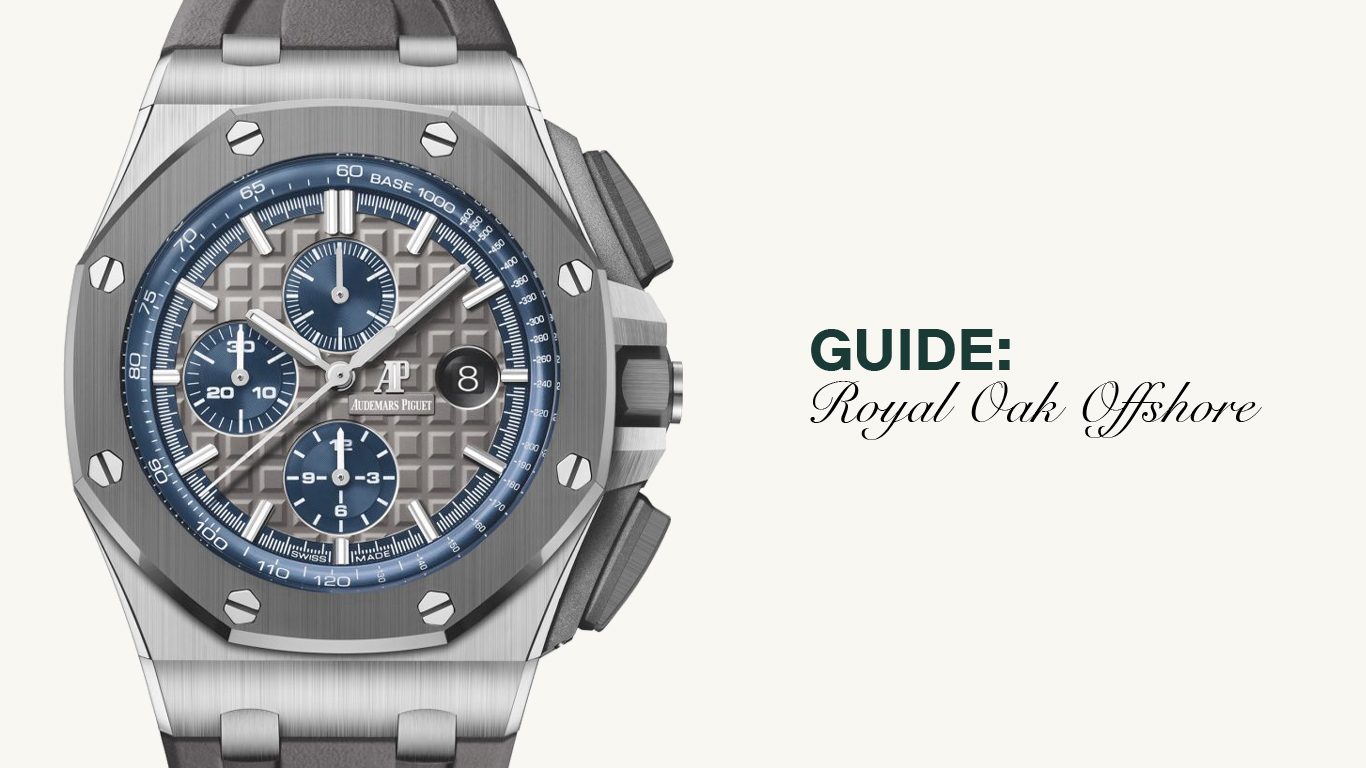 We've all heard the story of how Audemars Piguet's famous Royal Oak came to be, but have you found yourself wondering about the story of the Royal Oak Offshore? The bigger, bolder, sportier brother of the Royal Oak, made famous by sports stars and celebrities, has an equally exciting story around its conception.

A Chip Off the Old Block

To meddle with the iconic Royal Oak form was seen by some as outright blasphemy. Yet, the Royal Oak Offshore was never meant to compete with its older sibling. It was a playful reimagination of what the Royal Oak may have looked like had it been designed in the modern age. There were no plans to replace one with the other, instead intended to sit alongside one another and appeal to different audiences. In doing so, Audemars Piguet wanted to prove to the watchmaking world that it would not be defined by one watch, and that its design and watchmaking chops remained as sharp as ever. Alas, people did not initially view it this way, and its introduction was met with some resistance. For this reason, the AP Offshore is the often somewhat underappreciated and overlooked sibling in the Royal Oak family.

As watch fans, we've all harbored a desire to design a watch. Scribblings on notepads often end up in one realization: designing a watch from scratch is incredibly difficult. Designing a watch based on something that already exists is much easier but still not an easy task. However, Audemars Piguet once gave a young, twenty-two-year-old designer Emmanuel Gueit this exact challenge. In 1989, Audemars Piguet co-CEO Stephen Urquhart asked Gueit to develop a new Royal Oak 2.0, of sorts, that would help attract a younger audience.

According to Gueit, he had noticed that women were commonly wearing men's watches. In response to this trend, he wanted to design something very "masculine" and to him, this meant going big.

Ahead of Its Time

Although Urquhart gave Gueit the assignment to develop something for a younger audience, he wasn't quite ready for what the young designer presented. It was a chunky Royal Oak with more significant proportions and visible rubber gaskets. Although Gueit's designs impressed the CEO, Urquhart postponed its introduction for some years. At the time, thin quartz models were still in demand, and he was concerned that this new and extreme Royal Oak might compromise an already satisfied market.

Good Things Come to Those Who Wait

Eventually, Audemars Piguet decided the time was ripe, and the 20th anniversary of the Royal Oak in 1992 was the right moment to capitalize on Gueit's new design. Another postponement, however, meant the first AP Offshore wasn’t released until 1993. At first, the “Offshore” name did not appear on the watch or the caseback. It was not until after the first 100 pieces were sold that the brand felt comfortable enough to add the full “Royal Oak Offshore'' name to the case back.

The first model, reference 25721ST, was nicknamed "The Beast". Ahead of its time, the huge case measured around 16mm in height. This is still fairly large by today’s standards, but in 1993 that was gargantuan. The 25721ST used rubber for its crown and pushers, with a visible rubber gasket between its case and octagonal bezel. Underneath the modern flair, the Royal Oak Offshore was still a clear evolution from the original Royal Oak model.

In the interest of protecting the movement against magnetic fields, the 25721ST used Faraday cage technology. A soft-iron plate was mounted underneath the dial, while a soft-iron inner case surrounded the movement within. Combined with the heavy stainless steel bracelet, the watch weighed around 223 grams — not one for the fair-wristed individual!

The Offshore’s original automatic caliber 2126/2840 movement was based on the Jaeger-LeCoultre 888 caliber with a Dubois-Dépraz chronograph module. After the first 200 watches, Audemars Piguet began to use the newer automatic caliber 2226/2840, which was adapted from Jaeger-LeCoultre’s 889/1, again with a Dubois-Dépraz chronograph module.

While "The Beast" may be the original, Audemars Piguet's Royal Oak Offshore family of luxury watches soon grew to include various references now celebrated by collectors.

The Royal Oak Offshore reference 26176FO is aptly nicknamed the “Bumblebee” because of its distinctive black and yellow design. This 44 mm limited edition model features high-tech materials such as a forged carbon case, and a black ceramic bezel, while featuring the distinct yellow rehaut, Arabic numerals, and chronograph function detailing. Yellow stitching accentuates its black “hornback” alligator leather strap, characterized by the pronounced ridge at its center.

Audemars Piguet introduced the reference 26176FO at SIHH in 2009. The use of carbon and ceramic made the watch much lighter than other Offshore models available at the time of its release, but also much tougher than those produced using steel or gold. Unlike other Offshore models, it uses a folding deployant buckle for the leather strap, rather than a tang buckle.

Arnold Schwarzeneggar's T3 and "The Legacy"

Arnold Schwarzenegger and Audemars Piguet have collaborated on eleven different watches over the years. The T3 is a Royal Oak Offshore chronograph released in 2003, which coincided with the release of Terminator 3: Rise of the Machines. The Royal Oak Offshore reference 25863TI.OO.A001CU.01 was limited to 1,000 pieces, with examples produced with both silver and black dials. It features an oversized case, measuring 48 mm in diameter and a whopping 61.5 mm from lug-to-lug. Audemars Piguet also equipped the T3 with a unique hinged crown and pusher guards.

Commonly known as "The Legacy", the Royal Oak Offshore chronograph, reference 26378IO.OO.A001KE.01, was released in 2011 to celebrate Arnie's long standing partnership with Audemars Piguet. The watch was explicitly designed for Schwarzenegger rather than as a collaborative piece for a movie. Like the T3, it had a massive case measuring 48 mm in diameter and was limited to 1,500 pieces. This model is more reminiscent of classic Offshore models with no pusher guards. Arabic numerals, rehaut, and chronograph pushers in rose gold complement the black ceramic case and bezel. Kevlar is used for the Legacy’s strap. This material is more commonly found in bulletproof vests — most appropriate from someone like Arnie himself, no?

The Offshore Diver models feature a rotating inner bezel, central going seconds, and outstanding legibility which make the watch ISO 6425 compliant, the international standard for professional dive watches. To date, the Offshore Diver has been executed in stainless steel, forged carbon, ceramic, rose gold, and titanium, with colorful configurations available including the bright green, yellow, and orange novelties among others.

Since its introduction, the AP Royal Oak Offshore has become an icon and furthered the avant-garde nature of the Royal Oak. Though not everyone seemed convinced at first – including Gerald Genta himself – the AP Royal Oak Offshore proved to be a winner for many watch enthusiasts and Audemars Piguet. The collection represents the brand's mindset today, working to usher in trends rather than follow them. It could be argued that the Audemars Piguet Royal Oak Offshore helped pave the way for other larger luxury watches like the Hublot Big Bang and Richard Mille watches.

Audemars Piguet's Royal Oak Offshore collection is still alive and well today with a wide range of models available in various sizes, and with a variety of complications. Fancy a perpetual calendar? No problem. A chronograph, a tourbillon, or maybe both? Again, not an issue, AP has an Offshore model just for you.