In honor of the 50th anniversary of the Audemars Piguet Royal Oak, we explore its history and significance within watch collecting circles, along with the world of design as a whole. 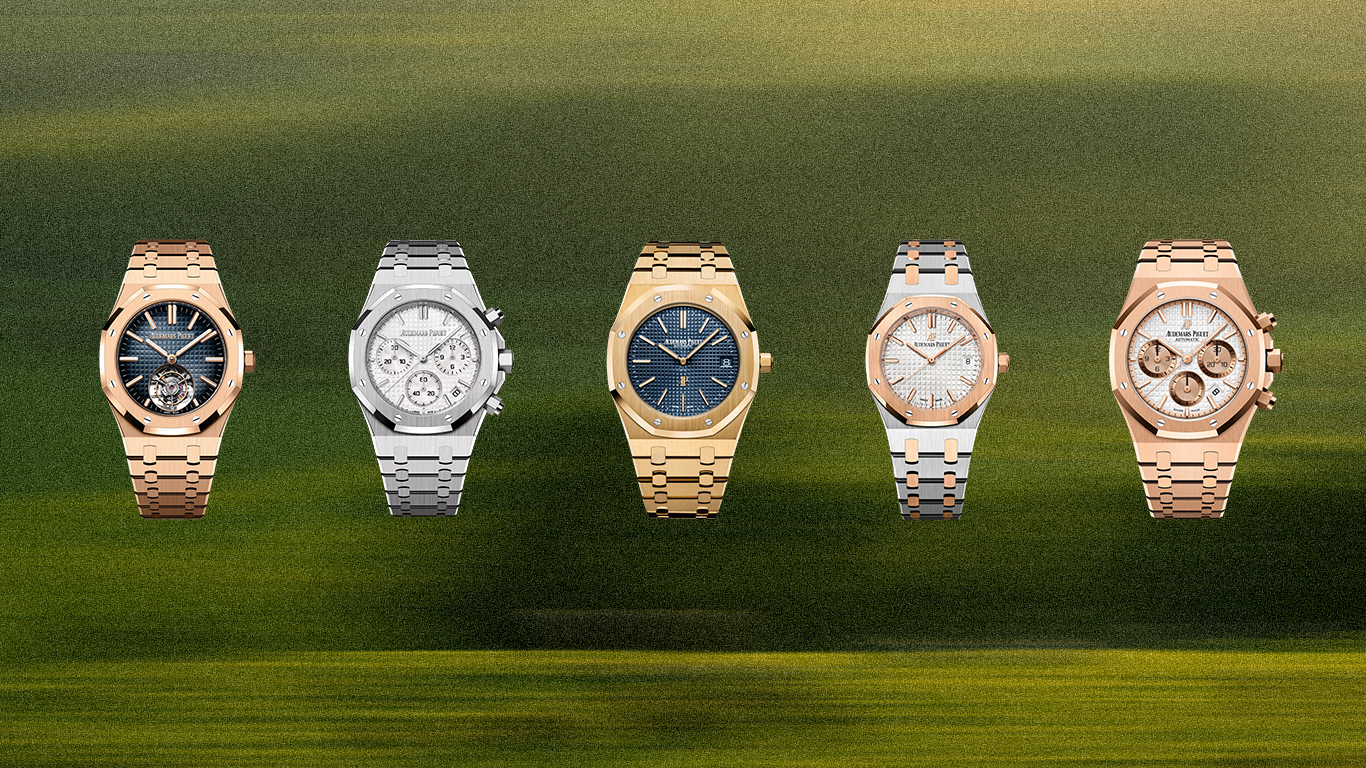 As mentioned in the second last installment of the Icon Intel series, the quartz crisis was a period of great uncertainty within the watchmaking industry, during which the livelihoods of the industry's biggest and most important names were threatened by the introduction of the world's first quartz wristwatch. In light of the greater precision and lower maintenance associated with quartz movements, traditional watchmakers like Audemars Piguet were forced to reevaluate their approach to the craft, and offer something which reinforced the value of luxury watches from Switzerland's most storied manufactures.

Following the approval of Audemars Piguet, Gerald Genta's design then entered development – a process which was expedited over the course of just one year to address the ever changing interests of the luxury market. This resulted in the 1972 release of the Audemars Piguet Royal Oak reference 5402ST, which took place at that year's Basel Fair. Characterized by its octagonal bezel – evocative of a diver's helmet, integrated bracelet, and a case measuring 39 mm in diameter, the first Royal Oak was nothing if not unconventional in comparison to the other offerings on display from the Fair's various watchmakers. Given its oversized nature, it quickly became known as the "Jumbo."

Moreover, the Royal Oak was also groundbreaking due to its bracelet and case material. While Audemars Piguet was far from the first to produce a watch in stainless steel, producing a luxury watch powered by a high grade, intricately finished movement in stainless steel was unheard of in 1972. Advertised using the taglines "A tribute to steel" along with "Would you buy a Rembrandt for its canvas?" the Royal Oak certainly challenged notions of what a luxury watch could be, reinforcing the appeal of a stainless steel case and bracelet paired with a top grade movement.

Evolutions of the Royal Oak

Since its introduction, Gerald Genta's original design for the Audemars Piguet Royal Oak has been continually innovated upon, yielding new and exciting variants of the now iconic luxury sports watch. With fifty years now behind the Royal Oak collection, the number of references and variations now making up the history of the model are truly astonishing, but those which fall into the most iconic "Jumbo" family are likely the most important and integral to understanding the gradual, heritage-focused evolution of the Royal Oak.

Given the historically significant nature of the original reference 5402 Royal Oak "Jumbo," Audemars Piguet has consistently produced variants of the reference, along with spiritual successors of sorts, channeling the genius of the original Gerald Genta design. As mentioned, the lineage of the Jumbo begins with the 5402, though this reference's production can be divided across four alphabetically arranged runs. Naturally, this began with the 5402 A series, and was followed by the B, C, and D series. Production of this reference would span over the course of nearly two decades, until the 5402 was discontinued in 1990.

Following the discontinuation of the original Royal Oak reference, Audemars Piguet celebrated the 20th anniversary of the Royal Oak in 1992 with the introduction of the reference 14802 Jubilee edition, of which just 1000 examples in total would be produced. Just like its predecessor, this Royal Oak featured the same octagonal bezel collectors had come to expect from the Audemars Piguet collection, along with a tapisserie dial, and an integrated bracelet.

Perhaps most notably, this reference ushered in a new era of Audemars Piguet Royal Oak Jumbo dial design, as indicated by the repositioning of the AP logo from the dial's lower half, to the twelve o'clock position. Unlike the solid caseback of the reference 5402, this sophomore Royal Oak also featured a sapphire crystal caseback, which proudly displayed a specially decorated rotor celebrating the jubilee anniversary of the Audemars Piguet Royal Oak. Like the A series of the original Royal Oak reference, the reference 14802 was limited to just 1000 examples in total.

After a four year absence from the catalog, the Audemars Piguet Royal Oak "Jumbo" eventually made its return in 1996 with the introduction of the reference 15002. Just like its predecessors, this Royal Oak was powered by the Jaeger LeCoultre-based caliber 2121 movement, featuring self-winding functionality. Similarly, it featured

Two years after the discontinuation of the short lived reference 15002, Audemars Piguet introduced the reference 15202, which has proven to be one of the single most important Royal Oak references in the collection's history, for a number of reasons. For one, this reference was produced for longer than any other in the history of the Audemars Piguet Royal Oak, with a production run spanning from 1999 to 2022.

Furthermore, the 15202 is also noted for having reintroduced the original dial design of the Jumbo back into the Royal Oak collection. As mentioned earlier, the reference 14802 featured a new dial design, characterized by the repositioning of the AP logo from the dial's bottom half to the twelve o'clock position. In honor of the 40th anniversary of the Royal Oak in 2012, Audemars Piguet brought back the dial design favored by Royal Oak purists, while also modifying the name of the watch. Known as the Jumbo in years past, this revision of the reference 15202 was then known as the Royal Oak Extra Thin, given the number of other oversized timepieces then available on the market.

The latest addition to the family of Royal Oak watches is the reference 16202, announced by Audemars Piguet in 2022 to mark the 50th anniversary of the Royal Oak collection.

This latest reference is seen as likely the most drastic evolution of the Royal Oak to date, despite appearing virtually identical to its predecessors. This is because the timepiece is now powered by a new caliber, after 50 years of having been powered by the caliber 2121, based on the Jaeger LeCoultre caliber 920. Although a formidable movement by all definitions, lauded for its extra thin profile, the new caliber 7121 movement which replaces it is a welcome upgrade, touting a greater power reserve of 55 hours, and a higher frequency (28,800 vph vs. 19,800), equating a greater accuracy.

On top of all that, both literally and figuratively, Audemars Piguet is fitting the self-winding movement of the reference 16202 with a specially decorated rotor, commemorating 50 years of the Royal Oak. It is expected that only examples produced in the year 2022 will be fitted with this special edition rotor.

Throughout the production of the Audemars Piguet Royal Oak, the manufacture has experimented heavily with different materials in the production of the iconic luxury watch. Though the Royal Oak will forever be recognized for its initial production exclusively in stainless steel, Audemars Piguet has since cased the watch in precious materials including yellow gold, white gold, rose gold, platinum, and even ceramic in more recent years.

The deviation from solely being produced in stainless steel can be explained by the fact that Audemars Piguet made a significant enough of a splash, so to speak, with its initial offering in steel, that the brand eventually cultivated a demand for Royal Oak watches in more luxurious configurations. Again, while indeed a deviation from the original ethos of the Royal Oak, it can be argued that producing a sports watch in a precious metal is similarly irreverent to producing a luxury watch in stainless steel.

Just as Audemars Piguet has experimented within the Royal Oak collection using different materials including white gold, yellow gold, rose gold, and more, the famed manufacture has also experimented through the integration of exciting complications. While the purity of the time only Royal Oak is indeed alluring, complicating the Royal Oak elevates it even further, resulting in a timepiece all the more special and inspiring.

The complicating of the collection began in 1986 with the production of the first Audemars Piguet Royal Oak Chronograph. Since this release, chronographs like the references 25960, 26320, 26331, and most recent 26240 have played an important role in the Royal Oak collection in more recent years, now enjoying perhaps just as strong and devoted a following as the iconic, time-only models.

The Future of the Royal Oak

As per usual, we sadly aren't privy to any sort of future telling crystal ball, but based on what we've seen come out of Audemars Piguet's Le Locle manufacture in recent years, we've got a decently good idea of what can be expected for the future of the brand's iconic model.

Thanks to popularity of the Royal Oak Perpetual Calendar models, along with skeletonized variants, and other complicated executions of the famed Audemars Piguet watch, it's safe to say we can expect further experimentation with complications, resulting in Royal Oaks the likes of which we never could have expected.

Similarly, collectors can expect the Royal Oak to be produced in more unconventional and exciting materials, given the introduction of full ceramic Royal Oak timepieces, including the ceramic perpetual calendar of 2017. Given the brand's breadth of experience and reputation for having furthered the renown associated with forged carbon cased watches, we'd be quite excited to see a forged carbon Royal Oak in the coming years.