Watch 101: The Dictionary (The 60 Most Important Watch Terms To Know)

From bezel to perpetual calendar, these are the most important watch terms you need to know. 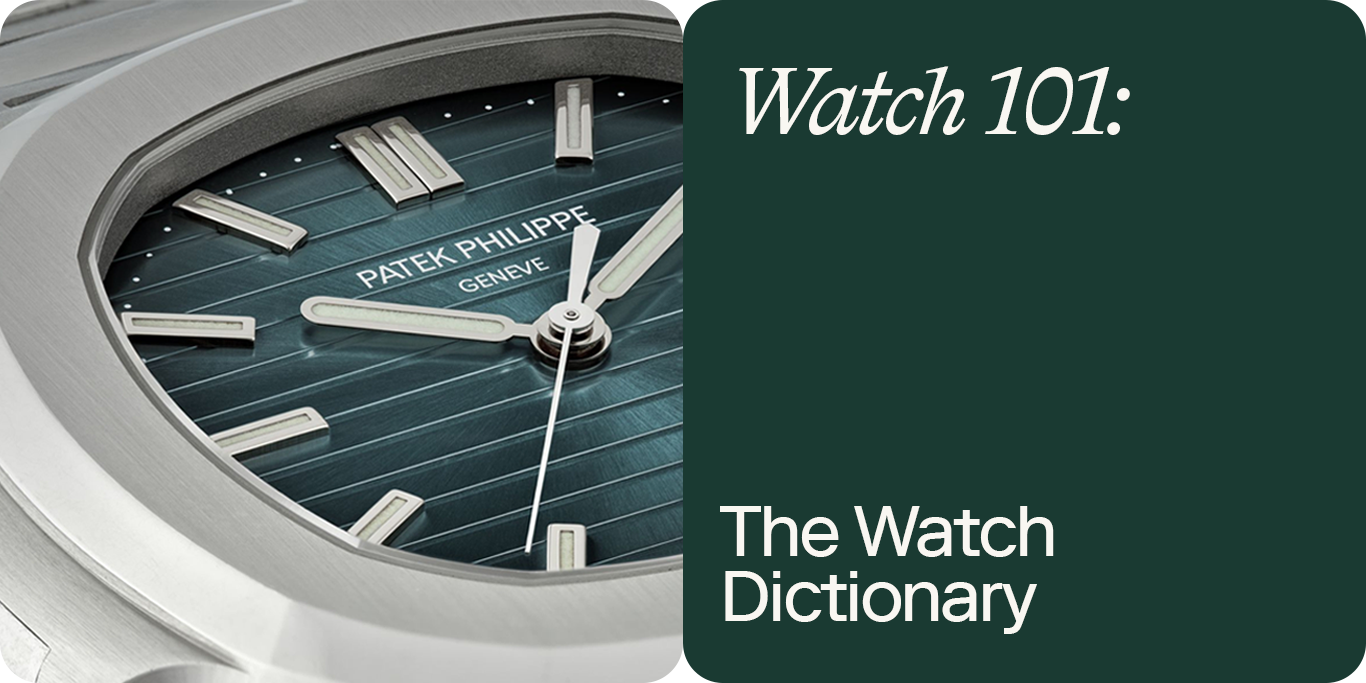 For those who are new to the world of watches, the avalanche of new terminology can often feel exclusionary. Listening to passionate collectors talk about timepieces can sound like they’re speaking an entirely different language — and to be fair, they technically are, since a significant number of watch-related words are actually in French! But while you certainly don’t need to become bilingual in order to enjoy watches, familiarizing yourself with some of the most important watch terms will allow you to maximize the enjoyment you get from this hobby — and it’ll also give you the power to make better decisions when it comes to what you choose to buy, sell, trade, and collect. To help you get a handle on the basics, we’ve put together an overview of the most important watch terms you should know.

‍A watch that displays the complete day, date, and month and needs to be manually reset once per year, at the end of February, since it can’t calculate the shorter month or leap years.

‍Denotes that the hour markers on the watch are separately attached components, rather than being painted or printed on the surface of the dial.

A watch that uses the natural motion of its owner’s arm to wind a spring, rather than being powered by a battery or needing to be manually wound each day.

‍Consisting of a thin coiled spring mounted within a wheel (known as the balance wheel), the balance is the system of components inside a mechanical watch that beats back and forth and is ultimately responsible for its timekeeping.

‍Essentially a hollow gear that houses a coiled spring, which powers the watch as it slowly unwinds throughout the day.

‍The component that surrounds the face of a watch; it can either be decorative or offer additional functionality, such as the rotating timing bezels fitted to dive watches.

‍In the world of watches, a metal band is traditionally known as a bracelet, while a leather or fabric band is called a strap (the term “band” actually doesn’t get used all that often at all).

‍The pieces of metal that form the framework of a watch’s internals and hold all of the gears and other smaller components.

‍Also known as a movement (see below), a caliber is basically the engine of a watch; a wide variety of different types exist, including some that are solar powered and others that blur the lines between mechanics and art.

‍The main external component of a watch that houses all of the other parts and gets strapped to your wrist.

‍A fancy name for a watch that has additional stopwatch functionality.

‍A watch movement that’s been tested for accuracy by an independent third party and is guaranteed to run within specific timekeeping parameters (assuming that everything is working properly and maintenance hasn’t been neglected).

‍An additional function on a watch beyond just telling the time, like a date display, a stopwatch, or a second time zone.

‍The Contrôle Officiel Suisse des Chronomètres (aka COSC) is the Official Swiss Chronometer Testing Institute that’s responsible for verifying the accuracy of the movements submitted to it and certifying those that pass as official chronometers.

‍The small knob located on the side of a watch that you turn to wind it or set the time (note: additional crowns generally mean additional features).

‍The clear part that covers the face of a watch; it can be made from a number of different materials ranging from acrylic plastic to synthetic sapphire.

‍No, this is not a typo — a deployant (not deployment) clasp is a style of folding clasp used to attach the two ends of a watch strap instead of a standard pin buckle.

‍This is another name for the water resistance of a watch, but it often doesn’t actually describe how deep a timepiece can operate underwater (a watch rated to 30 meters should not be taken scuba diving, let alone to nearly 100 feet).

‍What most people would call the “face” of a watch, this is the part that sits under the hands and provides a surface for the hour markers, text, and various printed elements.

‍The term used to describe the display window fitted to the reverse side of a watch that allows you to see inside.

‍Unlike a normal chronograph that must be stopped before it can be reset, a flyback chronograph lets users reset the chronograph and start it again, all with the single push of a button.

In watchmaking, the frequency is the rate that a balance beats inside of a movement, and higher frequencies generally allow for greater degrees of precision.

‍The seals that sit between the various case components of a watch to protect its internals from moisture and dirt.

‍Popular among frequent travelers, these watches can display two or more time zones at once with at least one of them presented in a 24-hour format.

‍A hack-seconds or hacking seconds feature is when the seconds hand on a watch stops when the crown is pulled out in order to enable greater precision while setting the time.

‍The thin coiled spring that resides inside the balance wheel (see above) and is ultimately responsible for the timekeeping and consistency of a watch.

‍The indicators mounted on the dial side of a watch that point out the time and various other values.

‍Originally created for saturation divers during the 1960s, this is a one-way purge valve that lets trapped helium molecules safely exit the case of a watch during decompression.

‍The science and study of time measurement, which also includes the art of designing and building watches.

‍Although a few brands take some liberties with this term, it’s generally used to describe when a specific component of a watch is exclusive to the manufacturer or when a certain aspect of its production process is carried out internally by the brand itself.

‍Small synthetic stones (usually rubies) that are used as the pivot points within watch movements to reduce friction.

‍The external parts of the watch case that stick out and connect to the strap.

‍Short for “luminescent material” and available in several different colors and forms, this is the substance used on watches that enables them to glow in the dark.

‍The core component of a watch movement, which serves as the foundation for all of the screws, gears, bridges, and various other smaller parts.

‍The coiled spring that resides within the barrel (see above), which powers the watch as it slowly unwinds throughout the day.

‍A watch with a traditional mechanical movement that needs to be regularly wound by hand, rather than winding itself by using the natural motion of the wearer’s arm.

‍Unlike a standard rotor (see below), a micro-rotor is a miniaturized winding weight that sits on the same plane as the bridges, rather than being mounted on top of the entire movement.

‍A minute repeater chimes out the time of day using a tiny built-in set of hammers and gongs, whenever its user presses a slider or a button on the side of the case.

‍A scale consisting of 60 individual markings that work in conjunction with the minute hand on the watch.

‍A specialized compilation that keeps track of the changing phases of the moon.

‍The total amount of time that a watch can run autonomously after being fully wound or charged.

‍Unlike a crown (see above), which is basically a knob that you rotate, a pusher is a button and can be used for other types of functions, like starting or stopping a chronograph.

‍Rather than using a traditional balance spring, these watches use electricity running through a quartz crystal oscillator to achieve a high level of accuracy with significantly fewer moving parts.

‍Also known as a split-seconds chronograph, a rattrapante could almost be considered two chronographs in one, and it features a set of two chronograph seconds hands with an additional pusher, enabling it to time multiple simultaneous events, like two drivers during the same race.

‍Aka the “flange,” this is the name of the angled component that fills the space between the dial and the underside surface of the crystal.

‍The component inside an automatic movement that rotates throughout the day and uses the natural motion of a person’s arm to wind the mainspring.

‍A watch that showcases its mechanics through an openworked design where excess material has been cut away to reveal the inner workings of the movement.

‍The small, spring-loaded pins frequently used to attach straps and bracelets to the cases of watches.

‍The thin metal rod that connects the crown on the outside of the watch to the movement located inside its case.

‍A popular type of photoreactive luminescent material used on watches that glows in response to light.

‍A complication that was originally intended to compensate for the effects of gravity on mechanical movements, but has now largely become a way for companies to flex their watchmaking skills.

‍Most frequently found on vintage watches, tritium is another type of luminescent material, but one that is radioactive rather than photoreactive, meaning it will glow regardless of whether or not it has received any light exposure (note: it will ultimately burn out and stop glowing entirely after about 25 years…but you’ve got time.)

‍A special device designed to periodically rotate automatic timepieces throughout the day to ensure that they stay fully wound when you’re not wearing them.

‍A highly innovative type of watch that gives its owner access to the time in all 24 major time zones, usually characterized by having either a globe or a ring with the city names printed on its dial.