Enjoying unparalleled histories and reputations for excellence, every collector should know about these three legendary watchmakers. 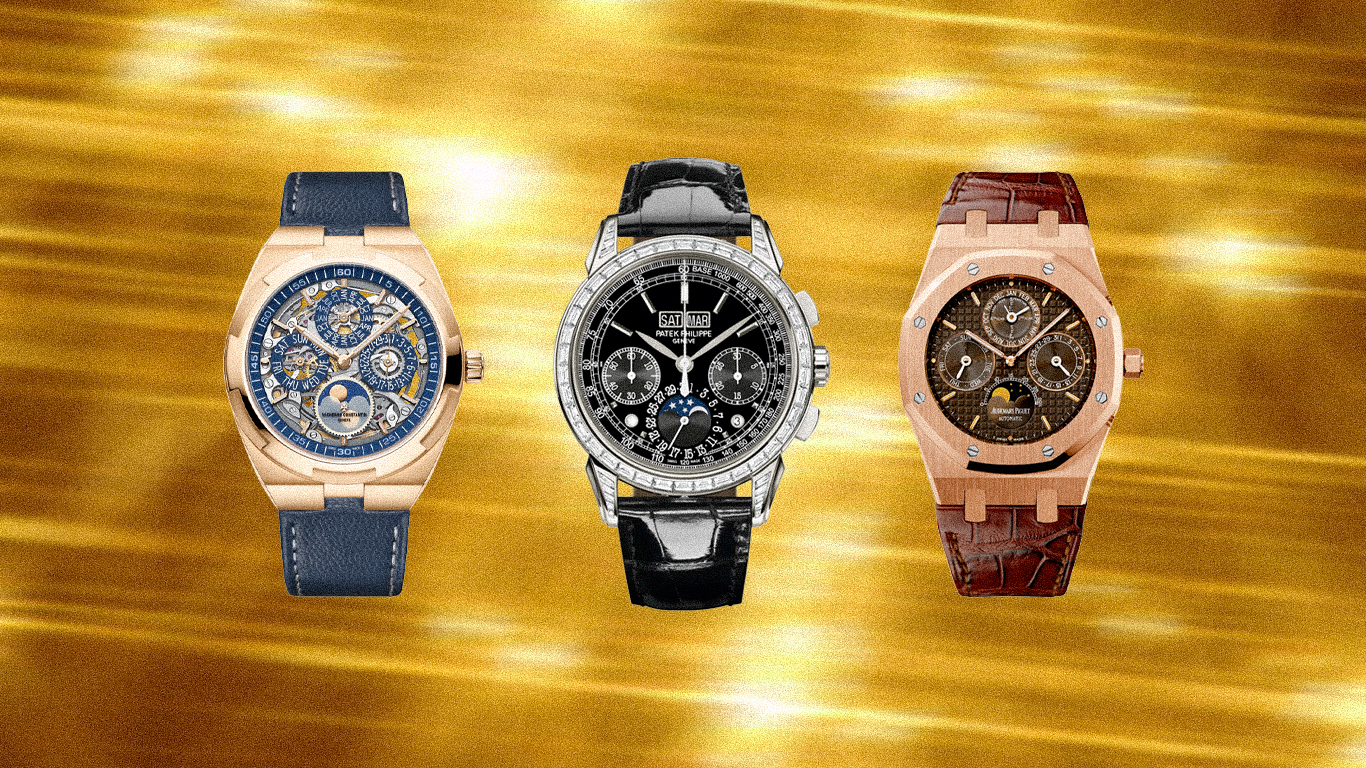 When you first find yourself in the world of watchmaking, it can feel a little bit like falling down a rabbit hole. Many things seem to make no sense, but if it’s any consolation, it can take years before they do. In addition to wrapping your head around the technical side of things, acquainting yourself with the history of the craft, and committing as many brands as you can to memory, you’ll also find yourself learning what amounts to a new dialect. From the outside looking in, it’s a world full of insider jokes and references, ostensibly unintelligible strings of numbers to refer to this, that, and the other, and terms that sometimes make less sense than seems polite.

One of the most common of these terms you’ll hear, is the “Holy Trinity”.

Don’t worry, you’ve not accidentally joined a cult. Well, maybe that’s not entirely true. There are elements of this industry that sometimes feel almost spiritual given the importance with which they are presented and the reverence in which they are held. This could not be truer for the Holy Trinity, which is the term used to collectively refer to three of the oldest and most esteemed watchmaking companies in the game – Patek Philippe, Vacheron Constantin, and Audemars Piguet.

Exactly who is responsible for grouping these three brands together and dubbing them as such remains a mystery. Whether it was a singular event that gave rise to the nickname or an almost logical beatification of these three legends that emerged organically over time, it’s hard to say. Regardless, it seems to fit rather well. But for that to make sense, a quick history lesson on this illustrious trio is needed.

The History of Patek Philippe

If you ask someone on the street to name a luxury watch brand, the chances are that one of two names will come to their lips before all others: if it isn’t Rolex, it’s almost certainly going to be Patek Philippe. And while associating a brand like Rolex with Patek Philippe may seem fair enough to a layman, those brands are in fact worlds apart upon further consideration.

The legendary brand’s story begins with Antoine Norbert de Patek first going into business in 1839, teaming up with fellow watchmaker François Czapek. Their partnership didn’t last more than six years and following its dissolution, Patek was on the lookout for a new collaborator. He later found watchmaker Adrien de Philippe, who was, at that time, best known for his keyless winding and hand-setting system, which he notably presented at the Industrial Exposition of 1844 in Paris. The name Patek, Philippe & Cie. was registered in 1851, and the company has been in continuous operation ever since.

Known for its exceptional mechanics and timeless aesthetics, the mainstream awareness of Patek Philippe exploded in the early 1970s when famous watch designer, the late, great Gerald Genta, designed the Patek Philippe Nautilus — the brand’s first truly luxury steel sports watch. The Nautilus was a game changer for Patek and it continues to be seen as the brand’s mainstream flagship to this day. However, it may never have existed were it not for an earlier design of Gerald Genta’s that just so happened to have been conceived four years earlier at another brand.

The History of Audemars Piguet

It is rare that the fates of two completely distinct companies should be so interwoven but it is true that the modern story of Audemars Piguet cannot really be told without mentioning Patek Philippe, and vice versa. Their unlikely connection is the designer Gerald Genta, who worked for both on a freelance basis, designing the Nautilus for Patek and, before that, the Royal Oak for Audemars Piguet. While the Royal Oak changed not just the brand’s fortunes but also the focus of the watchmaking industry – a shift that is still very much being felt today – it was far from the first notable timepiece from this brand, whose story reaches all the way back to 1875.

By 1881, the partnership between Jules Louis Audemars and Edward Auguste Piguet had been christened Audemars Piguet & Cie, after two childhood friends had reconnected in their twenties and set up shop in Le Brassus, one of the most active areas of the watchmaking mecca that is the Swiss Vallée de Joux. Unlike Patek and Philippe, a partnership that boasted only one trained watchmaker, both Audemars and Piguet were trained in the craft. However, in a similar style to their equally great counterparts, they divided duties cleanly with Piguet taking over the management of the business while Audemars oversaw the production.

The company, now under control of the fourth generation of Audemars to helm the business, continues to rank as one of the most recognizable and desirable marques in the whole world.

The History of Vacheron Constantin

Vacheron Constantin is perhaps the least known of the Holy Trinity outside of watchmaking circles due to its somewhat quieter presence on the marketing front. Vacheron has adopted more of an if you know, you know attitude towards its products, preferring to spread the word of its excellence by mouth and through products that, while subtle in their styling, are clearly examples of some of the finest material finishing on Earth.

Vacheron Constantin is not only the oldest of the Holy Trinity by quite some way, it claims to be the oldest continuously operating watchmaking company in the world. While several brands that exist today were founded before it, they have all been in and out of business since, unlike Vacheron which has remained active and relevant since the get-go. Similarly to the rest of the Trinity, the brand released a famous steel sports watch in 1977 on the heels of Audemars Piguet and Patek Philippe’s success in that field. Dubbed the 222, Vacheron’s effort was the only one of the Holy Trinity’s modern superstars not to have been conceived by Gerald Genta. Instead, Jorg Hysek was the man behind the 222. It was in production until the mid-eighties, but it, like most of the mechanical watchmaking, went into hibernation for a short while.

In 1996, Vacheron released what was clearly the direct descendant of the 222. While the Vacheron Constantin Overseas was the latest to the steel sports watch party when it came to Holy Trinity offerings, its lineage makes it feel more contemporary with the Nautilus and Royal Oak than it actually is. In fact, perhaps its late-coming, which bridged the gap between the end of one watchmaking era and the beginning of a new age, is what inspired the chasing pack to up their game in pursuit of the lofty status afforded to the Holy Trinity. More recently, the brand reissued the 222 to near exact specifications as part of their Les Historiques collection.

New Kids on the Block

As a recognized global industry, luxury watchmaking has never been healthier. Not since the very early days of the craft was so much of the focus placed on the quality of the work. During the earlier parts of the 20th century, all that mattered was affordable functionality. Watches weren’t seen as luxury items, per se. Before the advent of quartz-regulated timekeeping, mechanical watches were seen as tools and little more. And while there were better examples of the craft than others, the idea of these watches becoming collectible luxury commodities must have seemed almost farcical at the time.

And yet, in 2022, mechanical watchmaking exists almost primarily as a luxury industry. As such, there are more brands than ever, some relatively new, some relatively old, some old names resurrected and reborn under new owners, vying to take the place of Patek Philippe, Audemars Piguet, and Vacheron Constantin. Some analysts have already started to anoint a “modern” Holy Trinity.

Brands like the German powerhouse A. Lange & Söhne, founded in 1845 and brought back to prominence in the mid 90s, past Swiss masters like Czapek that returned less than 10 years ago, and ambitious designers like Bulgari are all making headway in this field. Their aesthetic and technical innovations mark them, among others, as ones to watch for the future.

It seems fair to say that we are living through a second golden age of luxury watches, with models such as the Odysseus, Antarctique, and Octo Finissimo among those leading the charge. There has never been a better time to be a watch enthusiast as there has never been a more conscious appreciation of the wonders we are seeing created before our eyes. And a lot of that is thanks to the high bar of luxury set by the original “Holy Trinity” of watchmaking, the eternal Patek Philippe, Audemars Piguet, and Vacheron Constantin.