Watch 101: How Accurate is a Mechanical Watch?

Let’s say you’re new to the game, and just getting into collecting higher end watches – you’ve probably wondered what’s to be expected when it comes to timekeeping accuracy. 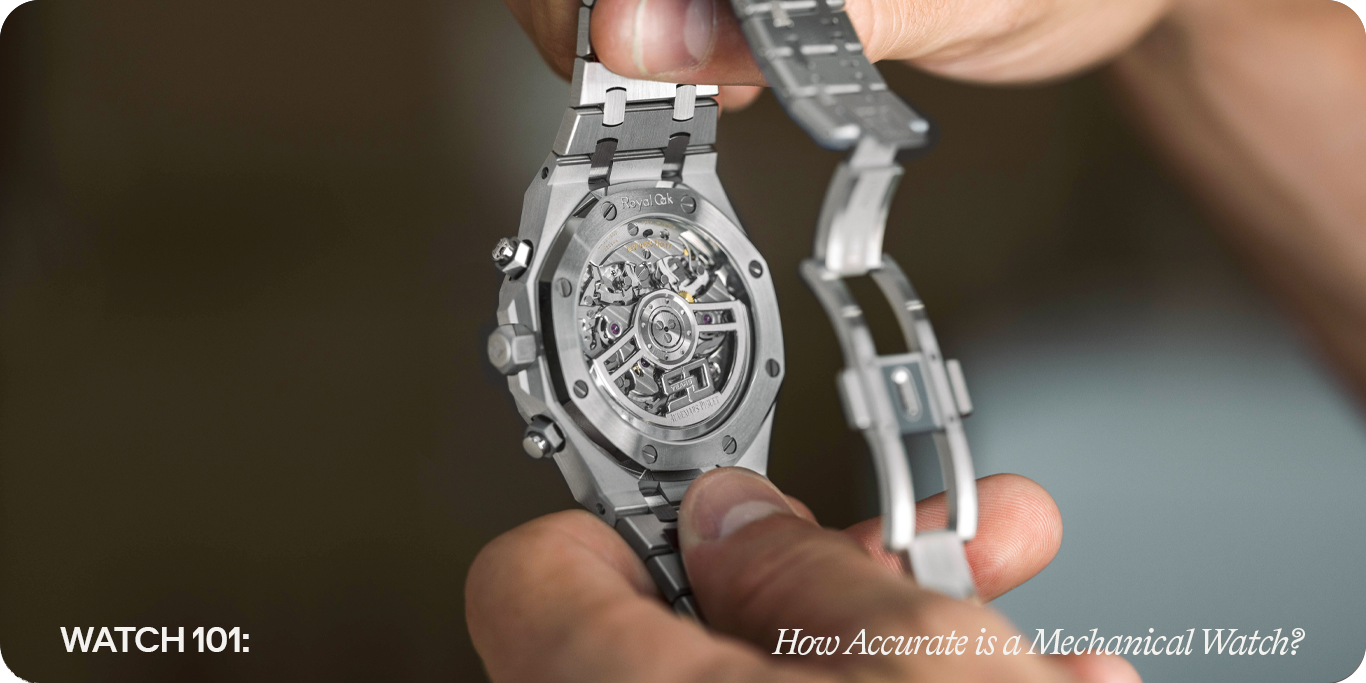 Let’s say you’re new to the game, and just getting into collecting higher end watches – you’ve probably wondered what’s to be expected when it comes to timekeeping accuracy. Given the prices that watches from brands like Rolex, Patek Philippe, and Audemars Piguet command, you’d be forgiven for thinking they keep time more accurately than anything else on the market, but in truth, the smartphone in your pocket is probably a far better bet if accuracy tops your horological hierarchy of needs.

That’s because even the most advanced mechanical movements just can’t match the precision of quartz movements, let alone internet connected computers, requiring far less adjustment and upkeep across the board. If you find yourself wondering just how precisely your brand new watch should keep time, and how can you ensure it continues to keep time accurately over years of ownership, scroll down for the lowdown.

For starters, let’s first address how the accuracy of a mechanical movement is measured and recorded. Watchmakers use an instrument known as a timegrapher, which generates numerical data reflecting accuracy by listening closely to the sounds made by a movement using a microphone. This device is operated by placing the watch into a system of articulating clamps, allowing for timekeeping accuracy to be measured in a number of different positions. Once secured, the timegrapher is started, providing telling metrics after just a few moments.

The most important metric for the purposes of most collectors is the beat rate, indicating how many seconds fast or slow per day the watch movement is running. The closer to zero that number is, the better, but don’t sweat over just a few seconds, as it’s more likely that you’ll have adjusted the time at some point before noticing a discrepancy of mere minutes.

Generally speaking, you can expect a well made and maintained mechanical watch to reliably keep time, and if you can’t, its movement probably needs an overhaul. This is because most watchmakers take great pride in producing accurate, finely adjusted calibers. For example, brands like Rolex boast accuracy ratings of -2/+2 seconds per day, meaning that over the course of a day, the watch can potentially run up to 2 seconds fast, or 2 seconds slow. This all adds up to the potential loss or gain of just one minute at the most in a month’s time, meaning that a new Daytona isn’t likely to make you late anytime soon.

With that said, it’s also important to remember that accuracy ratings on watches are determined at the time of their manufacturing, when a movement is assembled for the very first time, and all of its components are in pristine, unused condition. Therefore it’s more than reasonable to expect even a watch with chronometer certification of some sort to grow less accurate over time. At the point when the movement is noticeably losing or gaining time, then it’ll require an overhaul to bring it back to performing as it originally did.

In the same way that automakers have always cranked their R&D departments up to eleven to introduce faster and better handling sports cars, watchmakers have historically competed against each other to manufacture the most accurate mechanical movements they possibly can. Between the 40s and 60s, Swiss watchmakers even went as far as holding annual timekeeping accuracy tests, awarding only the most expertly regulated movements that passed with Observatory Chronometer certification.

Since the holding of these competitions, accuracy has become quite standardized across the watchmaking industry, with a number of testing institutions now operating to measure and certify accuracy before a watch is sold. Founded in 1973, the Contrôle officiel suisse des Chronomètres (COSC) has long served as the premier name in the game, awarding highly accurate watches with chronometer status. In order to receive a chronometer certification, a movement must be accurate to -4/+6 seconds per day.

Though that’s not to say that bar hasn’t been raised in recent years. In 2015, Rolex redefined the standards of their “Superlative Chronometers,” declaring that the accuracy of their watches must be twice what’s required of an official chronometer, being accurate to -2/+2 seconds per day. Omega has also followed suit in recent years, partnering with the Swiss Federal Institute of Metrology (METAS) to test and certify their watches after first being tested by the COSC. The METAS pass criteria is 0/+5 seconds, 0/+6 seconds, or 0/+7 seconds per day, depending on the size of the movement.

As mentioned earlier, timekeeping accuracy and maintenance go hand in hand, meaning that if you’re dissatisfied with how a movement is running after years of wear, the answer to your problem is most certainly an overhaul. Think of your watch in the same way you would your car. Just like what’s in the garage, finely crafted mechanical watches require occasional upkeep and maintenance in order to ensure they’re functioning accurately and optimally.

During an overhaul, a watchmaker removes the movement from the case, separates the dial from the movement, and fully disassembles the movement, before cleaning, lubricating where necessary, and reassembling the watch. Following this, the watchmaker will finely adjust the movement to achieve the maximum potential level of accuracy. Mechanically, an overhaul is akin to affording a watch a new lease on life, reviving every last bit of lost glory, and making the watch as accurate as it was at the time of its first winding.