SPOTLIGHT: Most Iconic Watches in Movies of All Time

Watch collectors have long been fascinated by seeing their favorite watches worn on TV and the silver screen over the years. Nowadays, it's difficult not to spot a watch on the wrist of the leading lady or man. 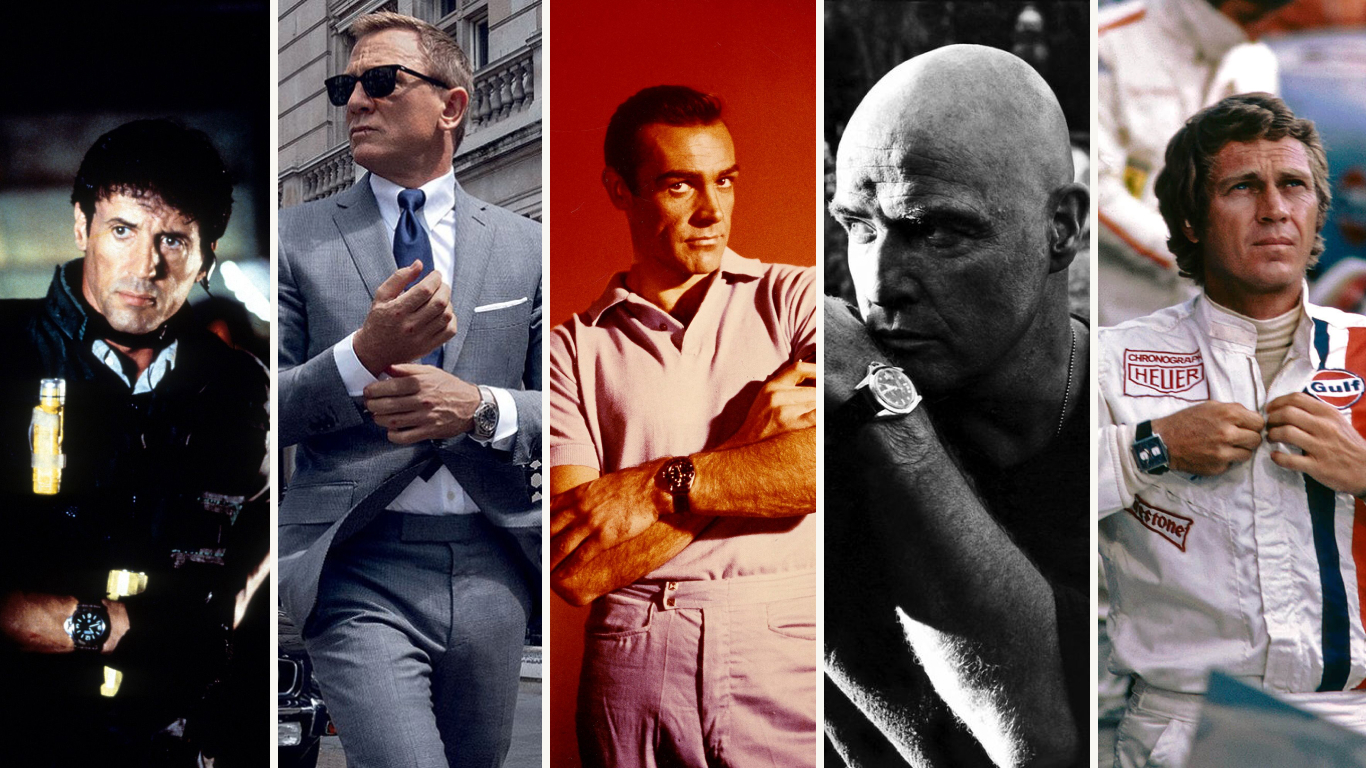 Watch collectors have long been fascinated by seeing their favorite watches worn on TV and the silver screen over the years. Nowadays, it's difficult not to spot a watch on the wrist of the leading lady or man. Some of these watches have even benefitted from this exposure to such a degree they've transcended their prop status and gone on to become iconic timepieces in their own right. Let's take a look at some noteworthy watches that gained legendary status thanks to their supporting roles on the big screen.

Rolex Submariner 6538 Big Crown, as worn by Sean Connery in Dr. No

While James Bond may be known for sporting an Omega watch in more recent films in the spy franchise, that wasn't always the case. Ian Fleming initially chose Rolex as the watch brand for his sophisticated, gun-toting, martini-drinking man of mystery. Fleming was known to be an owner and advocate of the brand, having notably worn a reference 1016 Rolex Explorer while writing the novels that inspired the films.

The author left us in no doubt about Bond's watch preference in his novel 'On Her Majesty's Secret Service', describing him as wearing "a heavy Rolex Oyster Perpetual on a metal watch bracelet". Fleming continued to reference Rolex in future writing, and Sean Connery prominently sported a Rolex Submariner dive watch when Bond made his big-screen debut in the 1962 film 'Doctor No'.

Heuer Monaco, as worn by Steve McQueen in Le Mans

Not all watches are carefully selected by writers, director, or a costume department for starring roles in movies. In the case of Steve McQueen's character in the movie Le Mans, pro racer Michael Delaney needed a watch, so the actor selected the blue dial watch himself. Supposedly, McQueen was close to selecting an Omega Speedmaster, but after prop manager Don Nunley reminded him of the Heuer badge on his character's uniform, the Monaco's on screen fate was sealed.

Tag Heuer offers excellent options for vintage and modern Monaco fans in its current catalog. The Tag Heuer Monaco reference CAW211P.FC6356 has the single-word "Heuer" branding and the uni-compax, double sub-dial layout. For further vintage inspired appeal, it's fitted to a black leather strap, featuring perforations like those found on early watch straps from the brand, and its date indicator remains at the six o'clock position. This is a big deal for purists who scoff at the sight of date windows relocated to unsightly places.

If you ever wondered why Heuer first placed the crown on the left-hand side of the case, it was the brand's way of telling people that manual winding was no longer necessary, thanks to the Caliber 11's automatic movement. Alternatively, the CBL2111.BA0644 offers a bi-compax, triple sub-dial layout, on a stainless steel bracelet, with alternating brushed and polished finishes to complement the unique square case.

Omega Speedmaster Professional, as worn by Tom Hanks in Apollo 13

When Tom Hanks was cast as Jim Lovell in the box-office hit, Apollo 13, history dictated which watch he would wear during filming. Based on the story of one of the most famous failed space missions, Apollo 13 was very well received thanks to its largely accurate depiction of the actual course of events.

An oxygen tank exploded en route to the moon, requiring the team to return to Earth. Among the many challenges faced by the crew was a precise 14-second fuel burn required to alter their trajectory and allow for the correct angle of entry into the Earth's atmosphere. The team of astronauts famously used their Speedmaster watches to time this.

To this day, the Omega Speedmaster Moonwatch is one of the most iconic watches in the world, having been a part of all six moon landings. In 2015, for the 45th anniversary of the Apollo 13 mission, Omega released the limited edition 311.32.42.30.04.003 "Snoopy" watch, featuring some subtle references towards the mission itself. The Moonwatch Professional 310.30.42.50.01.001 is Omega's most recent iteration of the Speedmaster, launched at the start of 2021.

When Christian Bale first strapped on the Jaeger LeCoultre Reverso Grande Taille in Batman Begins, it was the perfect watch for Bruce Wayne, and the perfect watch to kick off his involvement in Christopher Nolan's franchise of movies. Just like Reverso, Wayne has two distinct personalities. The public-facing Philanthropist, Bruce Wayne, and the caped vigilante alter-ego, the Batman. With its reversible face, the watch perfectly reflects the duality of Christian Bale's character.

Jaeger LeCoultre saw fit to immortalize the Batman connection to the Reverso when it launched the Reverso Ultra Thin Tribute to 1931 Batman Edition. Thankfully, Jaeger LeCoultre maintained the refinement of Wayne's watch from the film, with a sultry black dial. The Batman connection is only revealed when flipping the case over to reveal the legendary Bat-Shield, engraved and lacquered on the case back.

As an added honorable mention, it's also worth noting that the Jon Hamm character Don Draper wears a Jaeger LeCoultre Reverso in the TV show Mad Men, albeit a vintage example likely dating back to World War II. Unlike when the watch was featured in Batman, there's never been a Mad Men edition of the Reverso produced to date.

Even bad guys need good watches. In the cult 1979 classic Apocalypse Now, Marlon Brando's character, Colonel Walter E. Kurtz, wears a Rolex GMT Master 1675. But this isn't an ordinary, straight-outta-the-box model. Kurtz's GMT Master 1675 is just as battle-scarred and damaged from the Vietnam war as he is.

The matte-black dial, with its fantastic pumpkin-colored lume, and red GMT hand are present and accounted for, but its bezel and Pepsi bezel insert are long gone, as is the stainless steel bracelet. Kurtz instead wears his Rolex GMT Master 1675 on a rubber strap. Interestingly, the watch was actually Brando's personal GMT-Master, and he hand-engraved "M.Brando" on the caseback of the watch himself.

The GMT Master remains a stable member of the Rolex collection, but it has been upgraded since 1979. If you're after something sporting a similar feel but with contemporary features, the most modern version of the reference 1675 is the Rolex GMT Master II reference 126710BLRO.

The iconic Pepsi bezel remains, but the bezel insert is now made of Cerachrom – Rolex's proprietary ceramic alloy – meaning that on this Rolex GMT Master II, the colors will not fade as they do on vintage watches like the reference 1675.

Panerai PAM5218-201/A, as worn by Sylvester Stallone in Daylight

When the movie, Daylight came out in 1996, Sylvester Stallone's character could be seen wearing a Panerai watch. Specifically, it was a Panerai PAM5218-201/A. This celebrity endorsement from one of Hollywood's biggest stars helped to bring Panerai from relative obscurity to the forefront of collectors' minds at the time, making its appearance in the film arguably one of the most significant events in the history of watch marketing.

The watch is widely acknowledged as the catalyst for global launch Panerai's launch, and it helped change the brand, and the way modern watch brands advertise forever. Naturally, examples of the watch remaining in circulation are quite sought after and recognized as true collector's items. With its sharkskin strap, Stallone wore it non-stop throughout filming and was quoted as saying that this watch "​​went through hell in every scene".

After having been turned onto the brand by fellow actor and Panerai obsessive Arnold Schwarzenegger, Sylvester Stallone became quite the "Paneristi," later amassing a collection of several of the brand's timepieces.

While you can't get hold of this exact watch anymore, Panerai's modern iteration, the PAM01086, is as close as you can get in every way. The modern watch also benefits from a movement upgrade from the ETA 6497-1 original to Panerai's premium caliber P.6000. The upgraded movement gives an extended power reserve of 72 hours, beating the ETA's 45 hours by a considerable margin.

As we established, James Bond started out by always opting for Rolex watches in his early career thanks to Ian Fleming's personal preference for the brand. However, since the Pierce Brosnan portrayal of 007 in GoldenEye, Bond has favored Omega watches on his MI6 missions. Omega outbid its rivals to land the coveted product placement spot on the wrist of James Bond, resulting in watches like the Omega Seamaster, and later the Omega Seamaster Planet Ocean getting a starring role as the James Bond watch of choice.

This partnership has remained strong throughout several movies, including Casino Royale, Quantum of Solace, and Skyfall, where Daniel Craig wears Seamaster Planet Ocean watches, and most recently in No Time to Die, where Daniel Craig can be seen sporting the Omega Seamaster Diver 300M 007 Edition watch.

Daniel Craig himself helped to design his character's watch. The no date Omega Seamaster 300 007 Edition features a titanium case, tropical brown dial, and comes on a titanium Milanese mesh bracelet that is nothing if not comfortable on the wrist.