As a lifelong Daytona collector and the reason why exotic vintage Daytona dials are known as Paul Newman Daytonas, the pop culture legend is inseparable from the histories of Rolex and watch collecting. 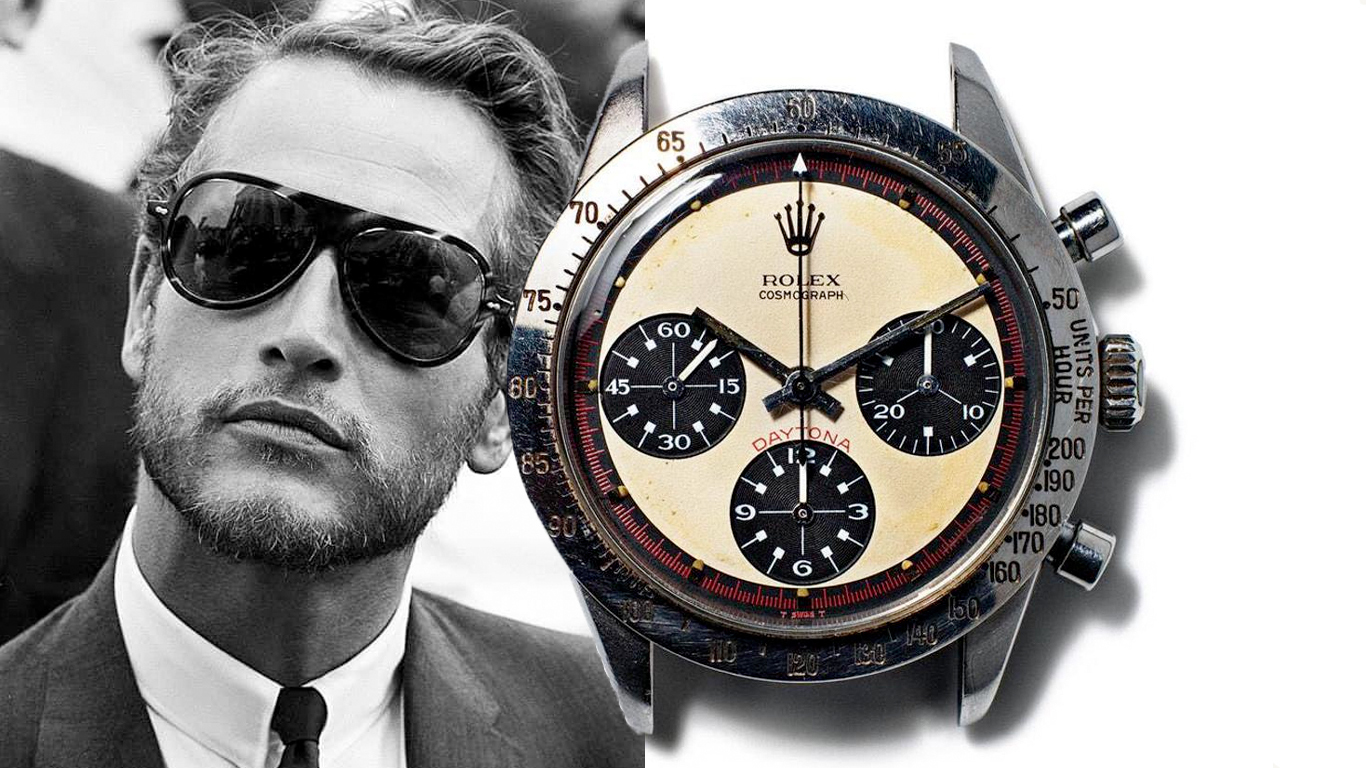 Whether you’re a seasoned collector, or just getting into the game, you’ve likely heard Paul Newman’s mentioned in discussion of the Rolex Daytona. As a lifelong Daytona collector and the reason why exotic vintage Daytona dials are known as Paul Newman Daytonas, the pop culture legend is inseparable from the histories of Rolex and watch collecting. If you’ve ever wondered which watches made up his storied collection, you’ll want to keep reading.

To understand the importance of the Paul Newman Daytona, along with its significance in watch collecting culture, one must first get acquainted with the man whose namesake the watch enjoys. Paul Newman was a noted actor and film director, who also famously moonlighted as a race car driver and entrepreneur. Best known for his performances in films like The Hustler, Butch Cassidy and the Sundance Kid, and Cool Hand Luke, the blue eyed Hollywood icon is among the most celebrated actors of his generation, synonymous with old school cool to the nth degree.

When the actor wasn't starring alongside Elizabeth Taylor, or working to support children in need through his Newman's Own Foundation, Paul Newman spent much of his time on the racing circuit, which began while training for the filming of 1969's Winning at the Watkins Glen Racing School. This initial exposure sparked a lifelong love affair with the sport, kickstarting a second career in professional racing that would span nearly four decades. As a second place winner at the 24 Hours of Le Mans, and a class winner at the 24 Hours of Daytona, it's safe to say Newman's interest in auto racing was no mere hobby.

As a professional race car driver and certified icon of American cool, Newman naturally took a liking to the Rolex Daytona. Being a sports chronograph designed with auto racing in mind, Newman's focused enthusiasm for Rolex's Cosmograph models is likely more so rooted in function over form, though he certainly appreciated the model's various forms given just how many examples he owned.

The first and perhaps most significant Daytona to have been associated with the actor and race car driver is the reference 6239, but not just any old example. Paul Newman's Rolex Daytona of choice was originally fitted by Rolex with what is referred to as an "exotic dial," featuring a tricolor configuration and numerals applied using a unique typeface. This particular watch was given to Newman as a gift by his wife at the time, Joanne Woodward, who affectionately engraved it caseback with the words "DRIVE CAREFULLY, ME."

For quite some time, Daytona models configured like such were seen as being less favorable amongst collectors, though this would all soon change. Following the increased circulation of a photo showing Paul Newman proudly wearing the watch on his signature black bund strap, Italian collectors began to refer to the exotic dial design Daytona as the Paul Newman Daytona. As a result of this nicknaming, the famed Daytona variant is now seen by many as the pinnacle of vintage Rolex Daytona collecting, as well as one of the most eye-catching models in the Rolex Daytona back catalogue.

In October of 2017, this star of this very watch transcended its already lofty and borderline mythical status when it was unearthed by Phillips auction house, and offered for sale to benefit the Nell Newman Foundation. Though its significance within vintage Rolex collecting, along with watch collecting as a whole was no secret, no one could have predicted the groundbreaking result it ultimately realized, bringing in $17,758,000 for charity. At the time of the New York sale, the Newman's Paul Newman Daytona set a new world record for the most expensive wristwatch sold at auction.

After Paul Newman famously wore the reference 6239, he could later be seen sporting an example of the reference 6263, fitted with screw down pushers, a black acrylic bezel, and a matching black dial. Although this watch doesn't feature an exotic "Paul Newman Daytona" dial design, it's still quite a special example of the watch, referred to as a "Big Red" dial thanks to its large model designation in red above the six o'clock position sub register.

Like its perhaps more famous predecessor fitted with pump pushers, Paul Newman's own example of the reference 6263 was sold at Phillips in London in 2020, achieving a sizeable result of $5,475,000 for charity, the third highest result for a Rolex watch at auction at the time. Similarly to his reference 6239, the caseback of Paul Newman's Daytona features another engraving commissioned by Joanne Woodward which reads "DRIVE SLOWLY, JOANNE," further intensifying the already impressive provenance accompanying the vintage watch.

Like his love for racing, Paul Newman's obsession with the Daytona spanned decades, and wasn't just limited to the manual winding references of the 60s and 70s. As the years progressed and the Rolex Daytona evolved, Paul Newman welcomed new references into his collection with open arms, including the first Daytona models powered by an automatic movement, corresponding with the reference number 16520.

Unlike the aforementioned Daytona models, the so called "Zenith Daytona" isn't seen as being a true Paul Newman Daytona, though that's not to say Newman didn't have a soft spot for these more modernly executed chronographs. After reviewing photos of the gone but not forgotten actor, we can make an educated guess that Newman owned at least two examples of this reference, with both white and black dial variants in his collection. This surely demonstrates his love for the Rolex Daytona in all its forms.

Paul Newman's taste in timepieces stayed true with age, as the actor, race car driver, and philanthropist could be seen wearing a Daytona up until the very end. In his later days, Newman could be seen sporting the reference 116519 Rolex Cosmograph Daytona on his wrist while attending and participating in motorsports events. Powered by the caliber 4130, developed entirely in house by Rolex, this piece is likely the most modern Daytona to have been worn by Paul Newman, as well as the most opulently configured.

While at first glance it may appear to be a run of the mill Daytona , this is no ordinary example, as evidenced by its black crocodile strap. With fixed end links, Rolex collectors will know this to be the reference 116519 Daytona, meaning that it's executed in 18k white gold. This is believed to be the only gold Daytona Paul Newman ever wore, earning it a special albeit less discussed significance within horological history.