If you’re tapped into the world of watch collecting, you’ll know that the past few days have been a momentous few for the Royal Oak and its countless collectors. 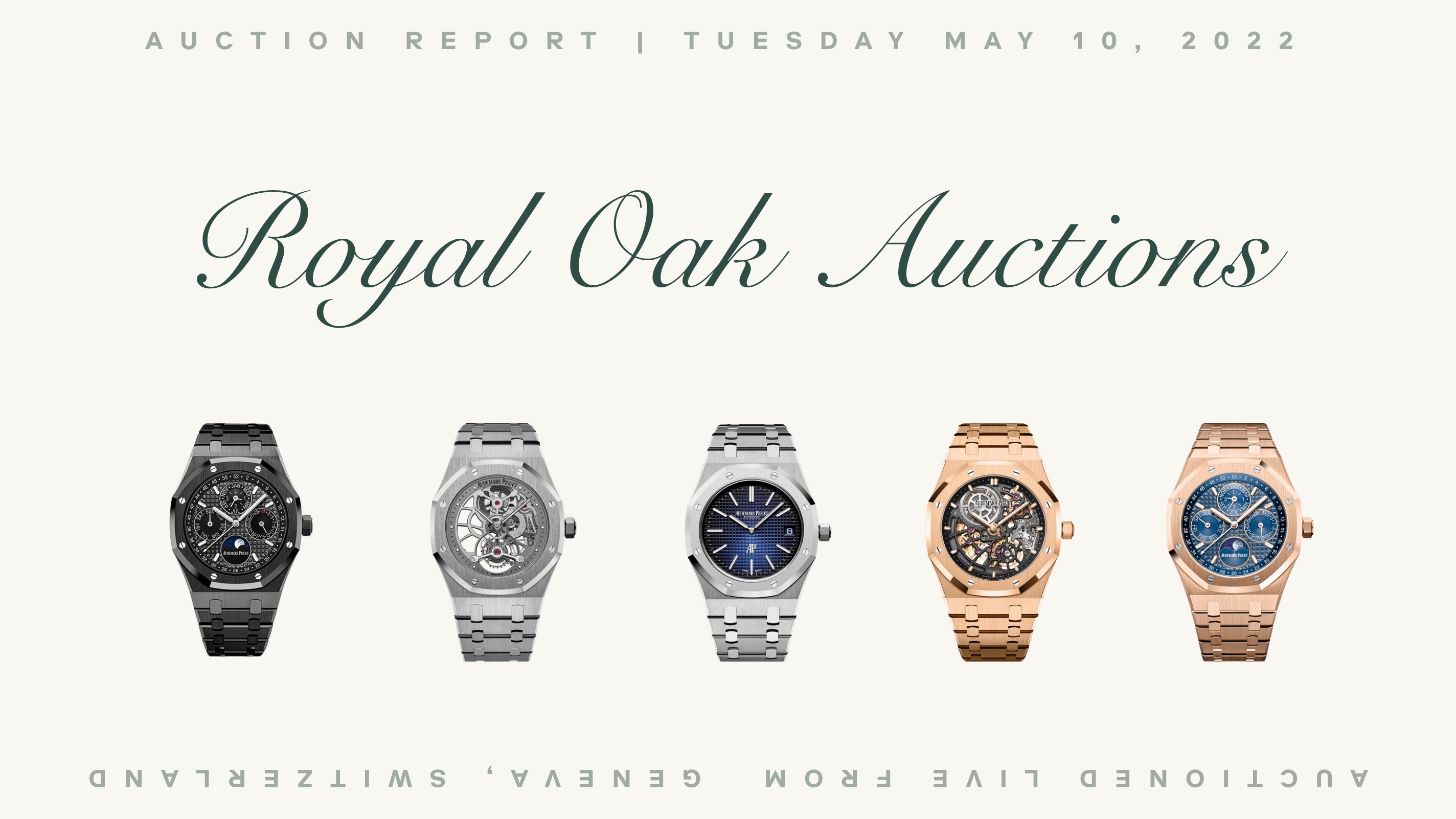 Celebrating its 50th anniversary this year, notable and thematic sales at Sotheby’s and Phillips in Geneva marked the occasion. With the sales now concluded, we’re recapping what went down, and what exactly to make of it all.

Overall, the Geneva sales proved that it’s a good time to be oh so lucky to see a Royal Oak upon glancing down at your wrist, and that demand for the luxury sports watch remains high. If you’re not convinced, just have a look at the results of Phillips’ The Royal Oak 50th sale, where all 88 lots sold, with just 6 lots falling short of their high estimates, and marginally so at that. With both vintage and modern examples of the now iconic Gérald Genta designed timepiece achieving solid results, optimism is in the air.

Unlike certain watches from other brands that might experience mixed results across different sales held at different auction houses – indicating a perhaps unstable market – Royal Oak sales were consistently strong, thanks to existing owners looking to bulk up their collections, and new buyers just getting into the game. All in all, you really can’t ask for better or more confidence inspiring results, which I’d personally attribute to the strength of the Royal Oak’s design, the significance of its 50th anniversary being celebrated, and of course, all the promotion leading up to the sales.

While there were no shortage of exciting variants of the octagonal icon to be had, including but not limited to complicated executions, gem set pieces, and examples produced with unconventional dial colors and case materials, these three watches undoubtedly drew the bulk of everyone’s attention, and for good reason.

The sale of notable Royal Oaks kicked off on May 6th at Phillips, where after the sale of seven rare and impressive examples of the luxury sports watch, the famed “A2” hit the block. Produced in four different production runs, beginning with the "A series,” the presence of the engraving reading “No A2” on this example’s caseback would indicate that it is the second example produced from the original series of the Royal Oak. Naturally, this exceedingly early Royal Oak attracted a great deal of attention, and later a strong result at auction.

First sold in May of 1972 – just weeks after first having been presented at the Basel watch fair in Switzerland – the minimal time between its introduction and sale is likely due to the fact that the watch buying market had never seen anything like the Royal Oak before, and naturally responded with frenzied enthusiasm. This is supported by Audemars Piguet’s sales figures, which were recently revealed after a longstanding widespread belief that the Genta design was originally met with indifference, when in truth the watch was a success from the start.

Originally purchased by the brother in law of an Audemars Piguet retailer, this early example has remained unworn since being purchased, now existing as a true time capsule to the earliest days of the Royal Oak. Thanks to its condition, the completeness of the set, and the importance of its early execution, the results were nothing short of outstanding.

All it takes is one look to tell this is no ordinary Royal Oak, and before you go scoffing at the notion of PVD coating a reference 5402ST, consider the story which accompanies this piece. Produced in Switzerland in 1973, and sold in Italy in the same year, this example of the reference hails from its original production run, deemed the “A series.” Originally purchased and worn by Karl Lagerfeld, this example underwent a PVD surface treatment immediately after the fashion designer and creative director purchased it, yielding the watch you’re now looking at.

It’s without question a polarizing decision, but one which even I can get behind, as somewhat of a purist that’s not too big on modifying watches. This is because the decision to PVD coat the watch was made by mister black and white himself, making it more than just a customized Royal Oak, and in fact a Lagerfeldian reimagination of a legendary design.

Furthermore, it’s not only significant for having been owned and worn by Karl Lagerfeld, but also for having played a notable role in the popularization of blacked out, PVD-coated watches, which are now of course a ubiquity of today’s watch industry. Remember, this isn’t an A series that got PVD coated over the last few years, this process was carried out back in the early 70s, at a time when it was far from common to do so to wristwatches in general, let alone luxury timepieces from Audemars Piguet. Having said that, it’s safe to say the sizeable result achieved by this piece at auction can be attributed to its provenance.

Last but most definitely not least, is the final significant sale of the Royal Oak 50th anniversary auctions – Gérald Genta’s own reference 5402, which was sold off earlier this morning at Sotheby’s. As most who have read anything concerning the Royal Oak to date will know, Gérald Genta is of course the designer behind the Royal Oak’s revolutionary design, and is also noted for having designed watches like the Universal Geneve Polerouter, Patek Philippe Nautilus, Omega Constellation, and Patek Philippe Ellipse among others.

Apart from being Genta’s own Royal Oak, this example is also noteworthy for being the only known example in stainless steel to be configured with a yellow gold bezel, making this two tone example likely a unique piece made at the request of its widely celebrated designer.

Dating back to 1978, and hailing from the C series of the reference 5402’s production, a conventional example of this Royal Oak would generally command less than an earlier example hailing from the A series. However, for the aforementioned reasons, it is anything but a conventional example, and is therefore deserving of every last penny which it ultimately achieved. The way I see it, this is the most important Royal Oak in existence, with the most impressive accompanying provenance imaginable, meaning it truly doesn’t get any better than this.

Though there are undeniably lessons to be learned and truths to be taken from a series of successful auctions, collectors should remember that auction results are to still be taken with a grain of salt, so to speak, as they’re often not direct reflections of the market. In other words, just because X watch achieved a new record selling for Y price at auction, this isn’t to say all other examples, including the one on your wrist now command that new record setting price in today’s market.

This is because emotion and competition factor into auction results more heavily than regular sales. There’s a palpable sense of excitement in the air when you attend an auction, and it’s known to often result in the making perhaps strange decisions, many of which oppose what logic or current market values would suggest are advisable. Knowing this, you should always remember when reviewing auction results that just because one buyer, caught up in the heat of the moment, was willing to pay well above market, that doesn’t mean the rest of the market will be.

Having said that, the sales inspired confidence in the market, as mentioned earlier. Across the board, examples of the Royal Oak achieved strong results, some consistent with market values, and others exceeding them. Most importantly, none sold drastically below market value, suggesting that in its 50th year of production, the Royal Oak is likely as sought after then ever before.