The Bezel Guide To Racing Watches: How To Find The Best One For You

Everything you need to know about racing watches, from the Rolex Daytona to the Omega Speedmaster. 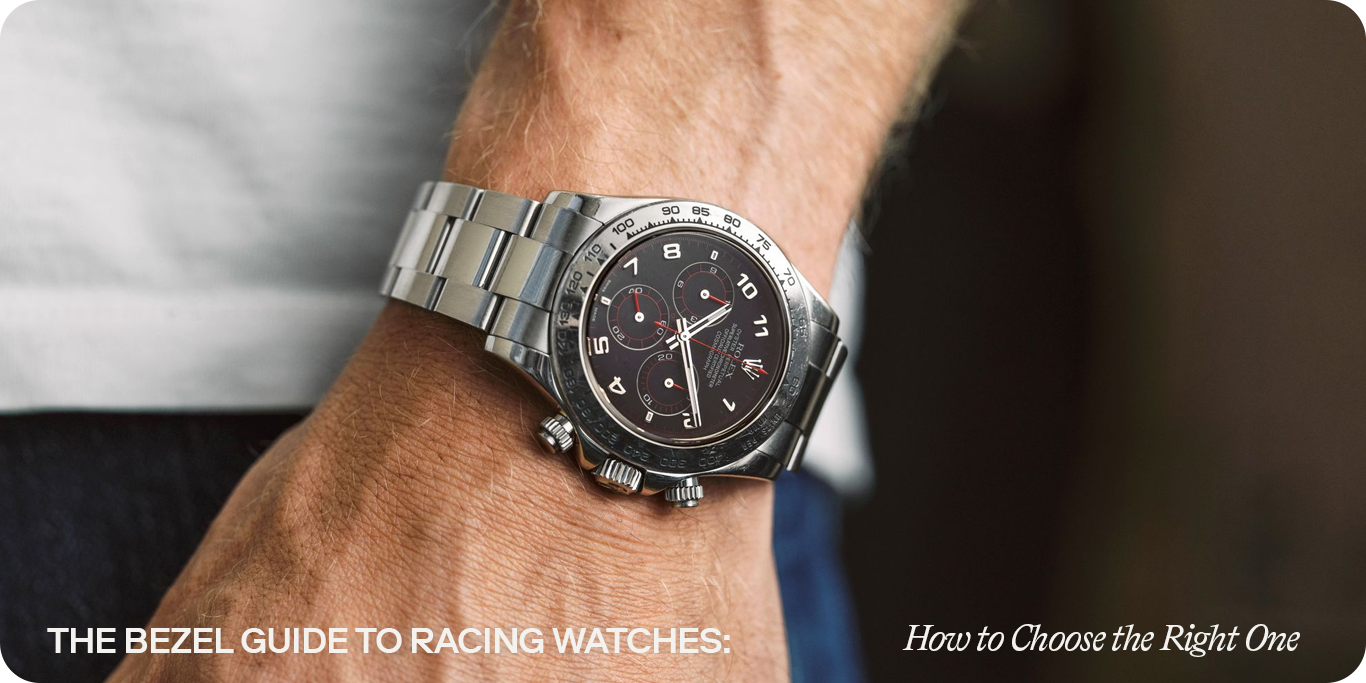 You’re probably already familiar with sports watches — those timepieces that are more about function than fashion — but within that greater category you’ll also find the sub-category of racing watches, which include some of the industry’s most popular models (think: Rolex Daytona and Omega Speedmaster). These watches are inspired by the world of racing (we know, how would you ever guess!) and often include additional features like chronograph complications and tachymeter scales that let wearers record lap times or measure average speed.

Today, racing watches are usually associated with automotive sports, but the core concept of a watch made to time races goes back way further than the invention of both the car and the wristwatch. And while some racing watches are literally designed to be used while racing, others are simply inspired by the world of racing, featuring design elements that nod to the aesthetic of sports cars and car culture in general, rather than offering additional functions and features to be used at the track. With that in mind, given the wide variety of different racing watches that exist (let alone the consideration of whether you want to go vintage or modern), finding the perfect one for your wrist isn’t always a simple task. To help you get started on your search, here’s a quick overview of some of the industry’s top racing watches.

First launched in 1963, the Rolex Cosmograph Daytona is now easily one of the most famous luxury watches in the world, and has been a constant presence in the brand’s catalog for well-over half a century. Named after Florida’s Daytona International Speedway racetrack, the watch has been famously worn by legendary actor and race car driver Paul Newman, and the mega-rare (and expensive) vintage Rolex Daytona models with exotic Art Deco style dials are now often referred to as “Paul Newman Daytona” watches in collecting circles.

While the Daytona has remained in constant production since 1963, it’s slowly evolved over time. In addition to slightly growing in size and gaining crown guards on the side of its case, the Daytona also now has screw-down chronograph pushers for additional water resistance, and even made the transition from being a traditional manual-wind watch to being a member of Rolex’s self-winding “Perpetual” lineup. While modern Daytonas have crystals made from scratch-resistant sapphire instead of acrylic, and now have bezels made from either solid gold or a proprietary ceramic material known as Cerachrom, all models remain instantly identifiable as part of Rolex’s legendary lineup of racing watches, and rank among the most famous and desirable luxury timepieces.

These days, the Omega Speedmaster is best known for being the official flight-qualified watch of NASA and the first watch worn on the surface of the moon. But back when the model was in 1957, the Speedmaster was originally designed for the world of automotive racing (hence the name). In fact, it was the first watch to move the tachymeter scale from the periphery of the dial to the external bezel to create a more legible display, an approach that’s been copied by countless other brands and timepieces over the years, including other icons like the Rolex Daytona.

The Speedmaster has remained a constant presence in Omega’s catalog since its introduction, and has been produced in countless variations, including some models that are specifically built for space exploration and competitive sailing. Omega still sells a version of the Speedmaster that’s largely the same as the original, complete with a Hesalite (plexiglas) crystal and manual-wind movement. Within the greater Speedmaster collection, Omega also produces a lineup of Speedmaster Racing models that lean into the original inspiration for the model, with automotive racing-inspired design elements paired with chronograph-equipped movements and tachymeter scale bezels.

Both vintage Heuer and the modern Tag Heuer brand have strong ties to the world of racing. In the glory days of mechanical timekeeping, Heuer chronographs were worn by many professional racing teams, and the brand even manufactured dash clocks and stopwatches for race cars. Today, Tag Heuer is closely tied to the world of motorsports and even sponsors the championship-winning Red Bull Formula 1 team. Although the brand produces a number of different models that nod to its racing heritage, the one that’s undoubtedly synonymous with racing is the Carrera, as its name quite literally translates to “race” in Spanish.

While the original Heuer Carrera was a clean and classic sports chronograph, the modern Carrera lineup has expanded into a wide variety of different models. Alongside vintage-inspired watches that largely stay true to the overall design of the original watch, Tag Heuer also produces modern versions that feature state-of-the-art materials and skeletonized movements. Additionally, while many Tag Heuer Carrera watches are fitted with chronograph movements and have tachymeter scales on either their dials or bezels, there are many other non-chronograph versions of the Carrera, including standard three-handed models and even some with GMT compilations. With that in mind, if your heart is set on a true racing watch, you’ll want to look at the various chronograph versions, as those most closely embody the model’s automotive racing heritage.

In addition to being the name of what is often considered the world’s first automatic chronograph movement, the Zenith El Primero is also a line of watches that are perfectly suited for use at the race track. Although Zenith has produced a few paired down three-handed versions of the El Primero over the years, the vast majority of examples are chronograph watches, and while most models aren’t marketed as being exclusively designed for timing automotive competitions, the majority of Zenith El Primero models offer all of the necessary functions and features to be highly capable racing watches.

A key component to the El Primero’s success as a racing watch is its legendary high-frequency chronograph movement. Despite being one of the very first self-winding chronograph calibers ever created, the Zenith El Primero is also often considered one of the best, and it runs at a frequency of 36,000vph (5Hz), which enables it to accurately measure times down to 1/10th of a second. Over the years, Zenith has produced countless iterations of the El Primero, which means a wide variety of different styles offer access to this iconic high-frequency movement. Some models are vintage-inspired creations heavily based on the original watches from 1969, while others are decidedly modern in their overall appearance. Regardless of their specific aesthetic, basically all Zenith El Primero chronographs make fantastic racing watches, and even the most humble of models still offer a level of timing precision that rivals just about any other mechanical chronograph in the industry.

Chopard produces a vast assortment of models, but the collection that leans most heavily on the sporty side is undoubtedly the automotive-inspired Mille Miglia collection of racing watches. Since 1988, Chopard has been the Official Timekeeper of the 1000 Miglia automotive race, where hundreds of historic cars compete in an endurance rally that runs from Brescia to Rome and back. The very first Chopard Mille Miglia watches were launched the same year the partnership started, and the Mille Miglia collection has been a cornerstone offering in Chopard’s catalog ever since.

A significant number of Chopard Mille Miglia watches are chronograph models that offer all of the necessary features to record lap times and measure your speed at the race track. However, alongside these more purpose-built timepieces are other Mille Miglia watches that draw inspiration from the world of automotive racing, but don’t actually offer the additional functionality needed for actual racing. Without the chronograph complications and tachymeter scales of their siblings, these Chopard Mille Miglia watches offer simplified designs that lean heavily into car-themed design elements — creating a noticeably more refined overall package than what you’d get from a traditional racing watch. Over the years, a wide variety of Chopard Mille Miglia watches have been produced, which means the collection has a bit of something for everyone, regardless of whether you want an automotive-themed timepiece to wear while you watch a race, or a highly-capable chronograph to record lap times while you compete in one.

Technically, the Audemars Piguet Royal Oak Offshore isn’t specifically a racing watch. But as the bigger and more modern sibling to the standard Royal Oak that originally made its debut appearance as a chronograph, there have been numerous different racing-inspired versions of the Offshore produced over the years. Although not all Offshore watches are chronographs, the majority do feature this classic complication, and surrounding the periphery of their dials are tachymeter scales, which means that models have all the necessary functions to either track a lap time or record your average speed.

While the classic Audemars Piguet Royal Oak can trace its roots back to the early 1970s, the  Offshore is an inherently more modern timepiece. In addition to its own sports-forward designs, there have been quite a few racing-inspired limited-edition versions of the Offshore Chronograph produced over the years, including the various Grand Prix models and the collaboration pieces that were created with legendary racing drivers such as Michael Schumacher, Sebastian Buemi, and Juan Pablo Montoya. When it comes to luxury timepieces that can perform double duty as both a racing watch and a statement piece, a chronograph from the Royal Oak Offshore lineup will always be on the shortlist of top models, as it offers one of the most distinct and immediately identifiable appearances within the industry, combined with all of the necessary features to serve as a faithful timekeeping companion for days at the race track.

There have been numerous Ferrari-related watches produced over the years, and in more recent times, the famous Italian supercar manufacturer has partnered with both Hublot and Richard Mille to produce exclusive, branded timepieces. However, arguably some of the most interesting collab pieces to feature the famous car logo are the various Panerai Ferrari watches, produced for a handful of years during the early/mid-2000s. Although the partnership between Panerai and Ferrari was short-lived and only lasted from 2005 and 2010, the pairing between these two iconic Italian brands was incredibly natural, and the co-branded watches created during this time have developed a cult-like following in certain collecting circles.

The Panerai x Ferrari watches were grouped into two separate lines, the Granturismo and the Scuderia, with the Granturismo models featuring the more traditional designs between the two options. Characterized by their cushion-shaped cases that offer an overall appearance that could be considered a modernized version of the brand’s Radiomir case silhouette, the Panerai Ferrari Granturismo watches feature the famous Italian car company’s signature prancing horse logo on their dials, and often small pops of either red or yellow on their dials and hands as a nod to the car’s colors. Although Panerai produced simple, time-only models as part of the Ferrari Granturismo collection and even created a few GMT versions as part of the lineup, it’s the various Granturismo chronographs that’ll likely be the top choices if you’re looking for a racing watch with Italian design DNA, and the stopwatch functionality and tachymeter scales they offer make them equally capable of being used to track lap times or speed during days at the race track.