With numerous celebrity endorsements and an intense popularity among musicians and athletes, you're likely already quite familiar with Richard Mille watches, and for good reason. 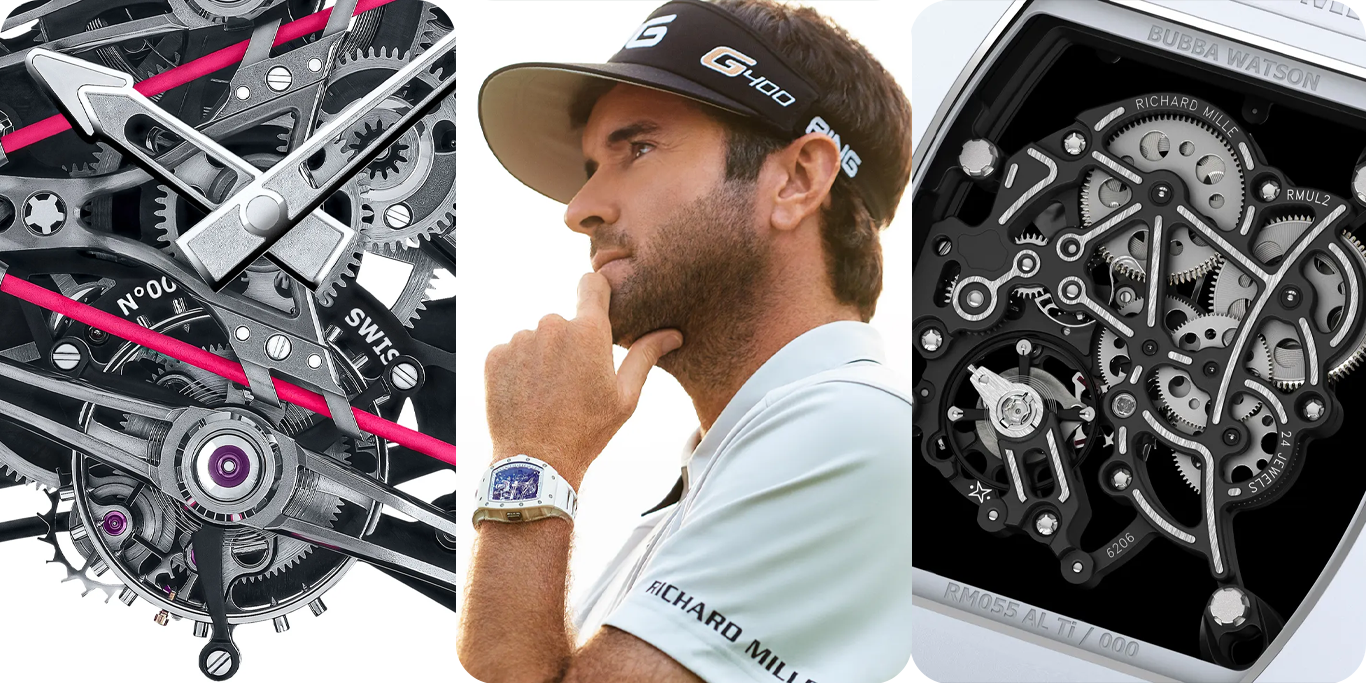 With numerous celebrity endorsements and an intense popularity among musicians and athletes, you're likely already quite familiar with Richard Mille watches, and for good reason. Existing at the cutting edge of horology, the brand attracts a daring clientele, of which the American professional golfer Bubba Watson is certainly no exception. Regularly name-dropped by rappers, alongside the likes of Rolex, Patek, and Audemars Piguet, Richard Mille is a relatively young brand by comparison, but that hasn’t stopped them from pushing the horological envelope.

The Origins of Richard Mille

Richard Mille started his career in the watchmaking industry in 1974, holding management roles in various watch companies. In the early 1990s, he became the managing director of the watch division of renowned French jewelry company Mauboussin. Here, Richard Mille met Giulio Papi, the Director of Research and Development at Audemars Piguet Renaud et Papi (APR&P), Audemars Piguet's high-end watchmaking division. His relationship with Papi inspired Mille to take the next step in his career and form his eponymous company in 1999.

His vision was to take the techniques and materials from high tech industries like F1 racing and aerospace and apply them to high end watchmaking. This approach to watchmaking was something that other watch companies had perhaps touched upon but never fully invested in. Two years later in 2001, Richard Mille launched his first model, which fully embodied his vision, thus starting a new trend in watchmaking. This ideology underpinned all of his creations from the start, beginning with the RM 001, right up to his most complicated watch ever made, the RM 62-01 Tourbillon Vibrating Alarm ACJ.

Back to celebrity endorsements – Richard Mille takes a slightly different tact when deciding with whom he wants to work. The brand doesn't simply go with high-profile names that might sell watches based on who the individual is. Richard Mille views sports as potential laboratories, which is why the brand primarily outfits athletes, like Rafael Nadal, who can put the Richard Mille watches through their paces, and prove that they can stand up to the ultimate tests of endurance. Golf's Bubba Watson is a perfect example of such a relationship.

Who is Bubba Watson?

Bubba Watson is an American golfer and one of the few left-handed golfers on the PGA Tour. Known for his two major championship wins and powerful drives, Watson earned a green jacket by winning the Masters Tournaments in 2012 and 2014, reaching 2nd place in the world golf rankings in 2015. As one of the more fun and colorful players on the PGA tour, Watson is well known for his signature pink driver, which makes him easily recognizable on the golf course.

So why Bubba Watson? Golf is a fairly sedentary sport, right? Walking around luscious green courses, or, in Bubba's case, maybe a hovercraft golf cart? Wrong. As we all know, there is an incredibly high-impact element to golf, which usually tends to not mix all that well with mechanical watches. The average golf swing can hit speeds of up to 90 mph. That's a metal club hitting a hard golf ball. The resulting shockwaves travel up the club and onto the timepiece via the player's arm, easily affecting the accuracy and timekeeping of sensitive watch movements. With this in mind, Richard Mille is putting its money where its mouth is, as. high-impact sports and shocks mean nothing to Richard Mille. This brand is not afraid of them.

Bubba Watson first met the enigma that is Richard Mille at an event in the south of France. Richard asked him, "Can you play with a watch on your wrist when you're golfing?" Bubba replied, "Sure I can! Can it be pink?" Sadly the answer was "no." Why pink? Well, pink is Bubba's signature color. Bubba chose pink for his clubs, his golf balls, his signature driver, and even some of his clothing. If you wear a Richard Mille on the course, you're making a statement. Why not make that statement as bold as you possibly can? Pink or not, you’ll soon see that each and every watch produced under this partnership between the athlete and watchmaker is nothing if not bold and statement making.

Bubba received his first Richard Mille watch at a tournament in Tucson – a prototype of the RM 038. The RM 038 houses a manual-winding mechanical tourbillon watch movement with hours and minutes, limited to just 38 pieces in total. The RM038 caliber has 19 jewels, and beats at 3Hz, boasting a power reserve of 48 hours. Produced using grade 5 titanium, the whole assembly is afforded a great deal of rigidity, as well as precise surface flatness, which is essential for the optimal functioning of the gear train.

The 39.7mm case is made of a highly rugged and lightweight alloy called magnesium WE 54. This alloy comprises 89% magnesium, 6% yttrium, and 5% rare earths, and it is one of the lightest metals used in construction.

After a long and delicate machining phase, this WE 54 alloy is given an electro-plasma oxidation treatment called Miarox, resulting in a crystalline oxide ceramic coating. The coating improves the alloy's durability and scratch resistance, as well as its wear and corrosion properties.

The following year, in 2012, Richard Mille debuted the new RM 055 Bubba Watson, inspired by the RM 038 Bubba Watson Tourbillon watch presented in 2011. The RM 055 featured a new movement, the caliber RMUL2, built to optimize its shock resistance capacities. The RM 055's caliber RMUL2 is thus capable of withstanding accelerations of over 5000 g's.

At just 3.15 mm in thickness, the RM 055's RMUL2 is made of PVD and Titalyt treated grade 5 titanium. It has 24 jewels, beats at 4Hz, and a 48-hour power reserve. The free-sprung balance offers better reliability in the event of shocks and guarantees better chronometric results. Perfect functioning and repeatable calibration is possible thanks to four individual, adjustable weights, located directly on the balance.

The symmetrical RM 055 grade 5 titanium case band and case back are protected by a white rubber casing, injected at high pressure around the titanium components, insulating the movement from all vibrations and improving comfort on the wrist.

For the RM 055's front, Richard Mille uses an ATZ bezel. ATZ is made from yttria-stabilized zirconia (ZrO2) and alumina (AlO2). High-pressure injection molding increases rigidity by 20 to 30 percent, and reduces the material's porosity to an absolute minimum. ATZ is also known for its long-lasting color and toughness greater than sapphire, making it one of the hardest materials after diamond.

After the success of the limited edition RM 038 Tourbillon released in 2011, Richard Mille went back to the drawing board to develop another specific tourbillon watch. The brand wanted to add new functionality to the timepiece, specifically with Bubba's golfing acumen in mind. The next model went back to the RM 038 silhouette. The RM038-01 combines a patented G-sensor with a tourbillon, providing new real-time data for players during their game.

The in-house manual winding mechanical G-sensor movement is a world-first for Richard Mille and the watchmaking industry. Containing more than 50 moving parts, it allows the user to see the accumulated motion of their swing in G's. The sensor, at 12 o'clock, can record the force generated by a golfer's swing. This means the RM 38-01 can record up to 20 G's of acceleration. To put that into perspective, military airplanes can experience G force up to 10 G's during maneuvering. The wearer can reset the sensor to zero for their following swing by pressing the pusher at 9 o'clock.

The 42.7 mm case is made of a combination of grade 5 titanium and a specialized ceramic alloy. The grade 5 titanium case band features a white rubber casing for added protection. Its eye-catching green bezel is made from TZP, a ceramic class of material based on microscopic tubes of alumina oxide powder injected with green colorant at a pressure of 2,000 bars, resulting in 20-30% more stiffness in comparison to traditional ceramics. It is highly scratch resistant and provides a clean, smooth surface finish.

After he received each Richard Mille watch, Bubba Watson always said he was blown away. However, he always asked if they could add some pink onto the watch, and every time he was firmly told "no”...until now. After 10 years of pestering, Bubba finally got his way, and his RM 038-02 features all the pink accents and detailing he could want.

The RM 038-02's caliber is a manual winding tourbillon movement with hours and minutes. It uses 21 jewels, beats at 3Hz, and has an increased power reserve of up to 70 hours. The base plate is machined from Carbon TPT, and the bridges are PVD-treated grade 5 titanium. Richard Mille also used a free-sprung balance with variable inertia. The resulting movement is 9.19 mm in thickness and resistant to over 10,000 G's. Considering Watson's swing can reach speeds of 310 mph, Bubba Watson's watch needs this kind of protection!

The asymmetrical 43.70 mm case is made of a slew of hi-tech materials in order to incorporate Bubba's love of all things pink. The case band holding the Carbon TPT baseplate in place is made of the same material but combined with pink Quartz TPT fibers. It was no small technical challenge to combine the different colors and materials subtly. The front and back bezels use a combination of white and pink Quartz TPT for what is definitely Bubba's most visually striking Richard Mille watch to date.

The Buck Doesn't Stop There

Richard Mille's association with sports is not limited to golf and Bubba. In fact, the brand is perhaps most famous for its associations with Formula One and tennis. For example, with tennis, Richard Mille has partnered with Rafael Nadal. Tennis also involves hitting a ball, resulting in massive shockwaves traveling up the athlete's arm. Richard Mille has worked with Nadal to develop numerous watches, all dedicated to withstanding intense shocks and being super lightweight to not distract or otherwise impact the player's game.