Few brands open the door to watch collecting better than Tudor, which is why the Black Bay 58 is the logical choice for many when faced with the task of acquiring their first great watch. 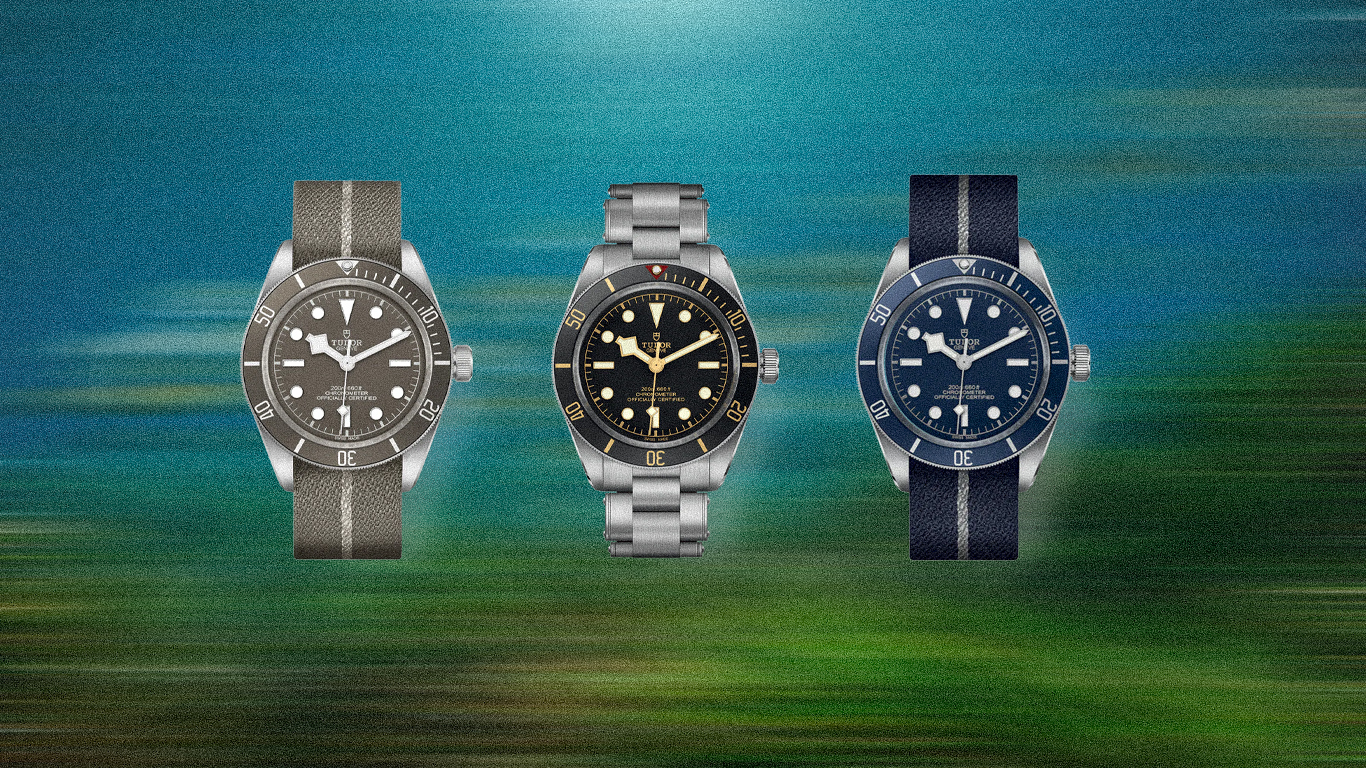 When asked to consider the most significant watches in the current landscape of horology and collecting, many will be quick to turn your attention to the loftiest of modern watches, listing off dream watch tier grails touting impressive complications. While such watches are indeed something to marvel at, we'd argue those at the entry level play a role equally as important, in that they're responsible for introducing new collectors to all the watch world has to offer. Few brands open the door to watch collecting better than Tudor, which is why the Black Bay 58 is the logical choice for many when faced with the task of acquiring their first great watch.

Though this accessible dive watch from the Black Bay line has only been in production for just over four years, the Tudor Black Bay 58 has quickly become one of the most universally respected and sought after modern watches in today's market. Channeling the ethos of early Rolex and Tudor Submariner models, the modern diver has set the standard for how to perfectly balance vintage charm and modern build quality to yield something that isn't merely a reissue, but a modern icon in its own right.

Today, we explore how this smash hit of modern watchmaking came to be, the various models that came before it, and the road Tudor has travelled to reach their now enviable position in the market.

Beginning in 2004, Tudor watches ceased to be available in the American market, after decades of having been offered alongside Rolex as a more budget conscious alternative, albeit one of still immensely high quality. Though the reasons behind this decision were never made entirely clear, it's more than likely that this was a decision made by the brand's parent company, Rolex, in an effort to further strengthen their own sales through limiting the number of options available to consumers.

This development in the brand's sales distribution model marked the beginning of a period of significant change, during which Tudor would appoint new executives, drastically modifying their collections and brand strategy to access a new, and more youthful demographic of watch buyers. All of these changes culminated with the official relaunch of the brand in 2007, when within the company, a greater emphasis began being placed on designing heritage-focused sports models. Fuelled by the increasing popularity of vintage watches at the time, this newly concentrated effort ultimately resulted in the release of the Tudor Heritage Chrono in 2010, which drew inspiration from the Oysterdate "Montecarlo" chronographs that brand had produced throughout the 1970s. Naturally, this release attracted the attention of many American collectors.

Just two years later in 2012, the brand doubled down on the production of heritage models when Tudor introduced the Heritage Black Bay collection – a new range of dive watches drawing inspiration from early Submariner models. Like Tudor Submariners in years past, the first Heritage Black Bay watches were powered by ETA calibers, though for the first time in the history of Tudor dive watches, they no longer shared a near identical design language with Rolex Submariner models. Instead, the Black Bay was given a unique case design of its own, free of crown guards, and fitted with a larger crown reminiscent of those found on "Big Crown" Submariner models of the late 1950s.

Furthermore, the Black Bay benefitted from the addition of "Snowflake" style hands, as seen on earlier Tudor Submariner models of the 1970s, and was first fitted with a red bezel insert, for a touch of unique flair. Altogether, these several facets of the new dive watch design struck a chord with collectors new and old, further intensifying demand in the American market once again. The popularity of these two aforementioned released eventually lead to Tudor returning to America in 2013.

Variants of the Tudor Black Bay

Following the introduction of the original, red bezel fitted Heritage Black Bay, Tudor went on to produce the Black Bay in a number of different variants. These included the blue bezel fitted Black Bay "Midnight Blue," which drew inspiration from Marine Nationale issued watches from Tudor's back catalogue, and the black bezel fitted Black Bay "Black," that was notably the first Black Bay model to feature a small red triangle on its bezel insert – a nod to early Rolex and Tudor Submariners – as well as the first to be powered by a new movement developed by Tudor themselves, upon the model's revision in 2016.

Tudor has also produced the Black Bay with a green bezel insert as a limited edition offering available exclusively at Harrods, London's Knightsbridge luxury department store. Like the red bezel variant of the Tudor Black Bay, this limited model features gold dial accents, but is distinguished by the printing of its depth rating in a dark green tone.

Known as the caliber MT5602, the introduction of this new movement marked the shift from off the shelf movements to in house calibers, and it did so rather impressively, considering its COSC chronometer certification, and 70 hour power reserve. This movement would go on to power all pieces in the range of time only Tudor Black Bay models, elevating not only the status of the Black Bay, but the Tudor brand as a whole.

Just as the movement in the watch was refined, Tudor also refined the dials of Black Bay models powered by the caliber MT5602, allowing collectors to easily distinguish between those powered by ETA calibers, and those featuring Tudor's in house creation. This can be done by checking for on the matte black dial for either a shield or a rose, as dials featuring the shield indicate the presence of the new in house movement.

Vintage Appeal with a Modern Feel

Building upon the success of the Black Bay models in years past, the Black Bay Fifty Eight made waves upon its introduction in 2018. Best known for having doubled down on vintage Submariner aesthetics for an even further vintage look, this new model treated the already fan favorite dive watch to a number of welcome finishing upgrades which arguably afforded the watch a more premium feel than its predecessors. These included lug bevels, similar to those found on vintage watches, a domed sapphire crystal, mimicking the appearance of an early acrylic crystal in a higher quality manner, and a case diameter measuring 39 mm across, making the Black Bay Fifty Eight feel more similar to vintage Submariner models on the wrist.

Just like the original Black Bay which came before it, the Black Bay Fifty Eight is offered with a number of different bracelet and strap options, making the watch easily individualized to suit specific tastes. For those who prefer a more substantial feel on the wrist, configuring the Black Bay Fifty Eight with Tudor's stainless steel bracelet is the logical move, though it's a decision that's not without a dash of controversy in the minds of some Rolex and Tudor purists.

This is because while the bracelet mimics the appearance of a rivet bracelet, like those found on vintage Submariner models, it is not a true rivet bracelet, and instead, its edges are simply adorned with faux rivets that are nothing more than decorative embellishments made to look like rivets. Despite this one gripe amongst purists, we believe these faux rivets ultimately work in the favor of the Black Bay Fifty Eight by helping further its vintage feel without compromising quality.

For those seeking a more casual feel, Tudor also offers the Black Bay Fifty Eight on a fabric NATO strap, but an especially high quality one crafted from woven textile. This fabric strap is offered in both black and blue, depending on which variant of the watch it accompanies. On the original, black variant of the Black Bay Fifty Eight, the NATO strap features a gold stripe through its center to match the accents found on the dial of the watch. Similarly, the fabric strap fitted on the blue dial variant is produced in a deep navy blue, and features a lighter blue stripe through its center to match the colors of its blue dial and bezel.

Variants of the Tudor Black Bay 58

As Tudor had done with the Black Bay models, the brand has continued to innovate upon the Black Bay Fifty Eight framework through the development of new variants, making use of new color schemes to delight devoted collectors of the brand.

After the initial reference, featuring a matte black dial with pink gold hour markers, and a black bezel featuring the famed red triangle at the sixty minute market, Tudor introduced collectors to the Black Bay Fifty Eight "Navy Blue" in 2020. As one might expect, the watch retained all the same dimensions of the first, though is executed with a cool blue dial and bezel insert. Just like the variant which came before it, it is offered on your choice of a steel bracelet, fabric strap, or a leather strap, and is powered by the Tudor caliber MT5402, featuring chronometer certification and a 70 hour power reserve.

Like the Black Bay "Midnight Blue" this variant of the Black Bay Fifty Eight draws inspiration from Tudor Submariner models originally issued to members of the French Navy, also known as the Marine Nationale.

Introduced to the shock and surprise of countless collectors in the Spring of 2021, the Black Bay Fifty Eight 925 marks the first instance in which Tudor has produced a dive watch with a case made not out of stainless steel, but in sterling silver. Indicative of the brand's commitment to experimentation, this unconventional execution of the Black Bay is offered by Tudor at a far more fair price than most would expect, given the precious nature of the metal.

This watch is further distinguished by its greyish taupe dial, that's accented by a matching bezel. Together, these components nearly mimic the appearance of vintage variants of the Tudor and Rolex Submariner, faded after years of exposure to the elements.

Existing as the most exclusive variant of the Black Bay Fifty Eight produced to date, the Black Bay Fifty Eight 18K, also introduced in Spring of 2021, reimagines the Black Bay in brilliant yellow gold, with a green dial and green bezel. This is perhaps the least expected and most surprising watch release in Tudor's post relaunch history, as it defies the generally accessible, modest positioning of the brand's offerings due to its gold case material.

The Future of the Tudor Black Bay 58

Though it's just about impossible to predict exactly what's in store for the Black Bay 58, along with the Black Bay collection as a whole in the years to come, Tudor has shown no indication of ceasing to experiment, inspiring collectors to expect the unexpected, and no shortage of new models in the years to come. This notion is supported by the release of the Black Bay models featuring GMT complications, and most recently, the Black Bay Pro, which draws inspiration from early Rolex Explorer II references.