Watch customization is one of those controversial topics because people’s opinions on the matter can differ significantly. 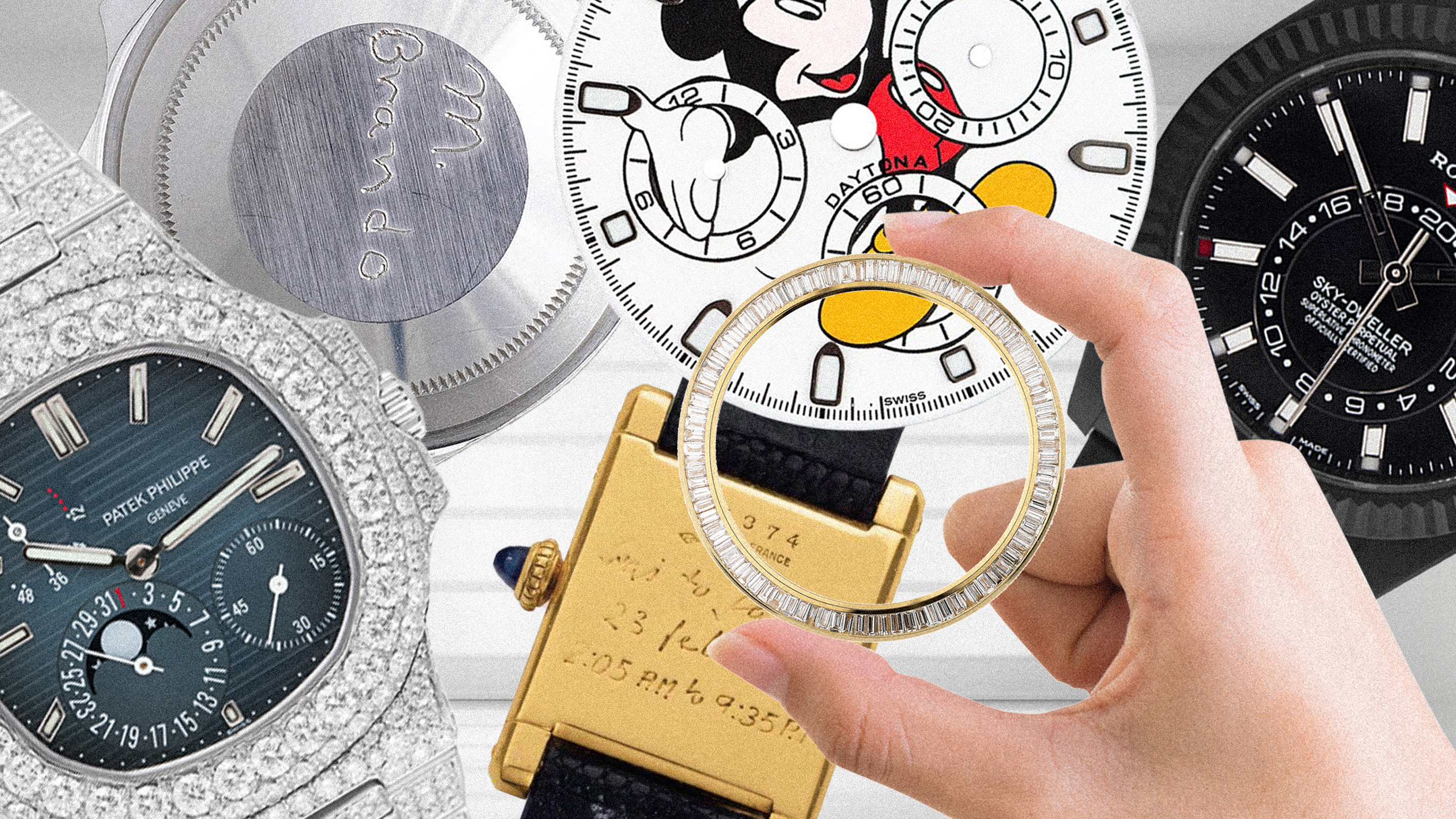 Although one-of-a-kind creations are often highly prized in certain industries, custom watches aren’t met with nearly the same widespread enthusiasm, and in some cases, customizing a watch – even covering it in diamonds – can actually decrease its overall value.

So, what exactly is the deal with watch customization and is it something that you should ever consider? Below is a complete guide that covers everything you need to know.

What Is Watch Customization?

In simple terms, watch customization can be defined as physically altering elements of a watch in a permanent or semi-permanent manner to make it function or appear differently than when it was originally manufactured.

Although changing the strap on your own watch can technically be considered a minor type of customization, when people refer to custom watches, they really mean those that have been modified in a way that would either require parts to be significantly altered or replaced in order to return them to their original factory-intended forms.

There is a wide array of different methods for customizing a watch, and below is a shortlist of some of the most common ones:

With that in mind, there are many other ways to customize a watch, and there are even services that will alter or replace nearly every single component on a timepiece in order to achieve a truly unique final product.

It’s also important to draw a distinction between custom watches and bespoke timepieces. Although there can often be some overlap, the two terms are not interchangeable, and there are a few key differences that are important to note.

A custom watch is one that originally started its life as a standard-production model and was later altered to make it either function or appear differently.

Conversely, a bespoke timepiece is generally regarded as one that was made specifically for its owner and began its life as a one-of-a-kind commissioned creation.

Why Would Someone Want to Customize a Watch?

In regards to why someone would want to customize a watch, the primary reason is to achieve a particular aesthetic (or sometimes to include additional features) beyond what is available directly from the manufacturer.

While a desire to customize a watch can sometimes come out of necessity, for example, altering the surface treatment to eliminate glare, in most cases, it is done entirely for cosmetic purposes, like adding a personalized engraving or diamond embellishment.

The Pros and Cons of Custom Watches

Just like anything, custom watches have their own unique list of pros and cons. Furthermore, the importance of each one can differ between collectors, depending on the person's individual style, priorities, and preferences.

The primary advantage of custom watches is that they allow people to personalize a timepiece to achieve a unique style or add features that are not offered by the manufacturer.

For example, timepieces given as wedding gifts can be adorned with special engravings that celebrate the occasion, and custom watches often make great gifts in general because they allow the person giving them to personalize the watch especially for the recipient.

A lot of people are attracted to luxury timepieces because they are inherently exclusive items, and having a custom one ensures that no one else will ever have the exact same watch.

In some industries, a customized product will almost always be worth more than a standard example. However, when it comes to luxury watches, it is generally the all-original ones that are worth the absolute most.

Additionally, customizing certain models can also create functional issues. For example, adding diamonds to a dial can result in clearance problems for the hands, and a custom diamond bezel may not be entirely compatible and prohibit a watch from properly being sealed against moisture and dirt.

In some cases, brands may even decline the future service of watches due to their customizations, simply on account of the unknown functional issues that they may create.

As strange as it may seem, a vintage watch that has never had any parts replaced (or even had its case polished) will almost always be worth more than an otherwise identical example that has been fully restored and fitted with a replacement dial.

Personalized Watches vs. Pieces of History

People who enjoy custom timepieces place an emphasis on having personalized watches that they aren’t likely to see on anyone else’s wrist. Additionally, some individuals may opt for a customized watch model because they want a specific appearance that isn’t offered by the original manufacturer.

On the other hand, many vintage watch collectors value timepieces because they see them as small pieces of history. If part of the inherent value of vintage watches is their ability to serve as time capsules and be representative of previous eras, originality is paramount and any customizations will only detract from their overall appeal.

The Future Collectability of Custom Watches

One important thing to remember is that all of the modern watches being produced today will eventually become the vintage models of the future. If a core part of the reason why today’s collectors value older timepieces is because they represent time capsules from a past era, then custom watches are almost guaranteed to be worth less money in the future than their all-original counterparts.

At the end of the day, a bespoke creation that was produced by an iconic manufacturer such as Rolex or Patek Philippe will always be an extremely valuable timepiece. However, a one-of-a-kind watch that is only unique because of third-party customizations will never be held in the same regard as a truly unique piece that was produced by one of the industry’s most prestigious luxury manufacturers.