How to Talk About Watches at Thanksgiving

Your comprehensive guide on how to talk about watches, from the hype surrounding watch collecting to basic watch terms. 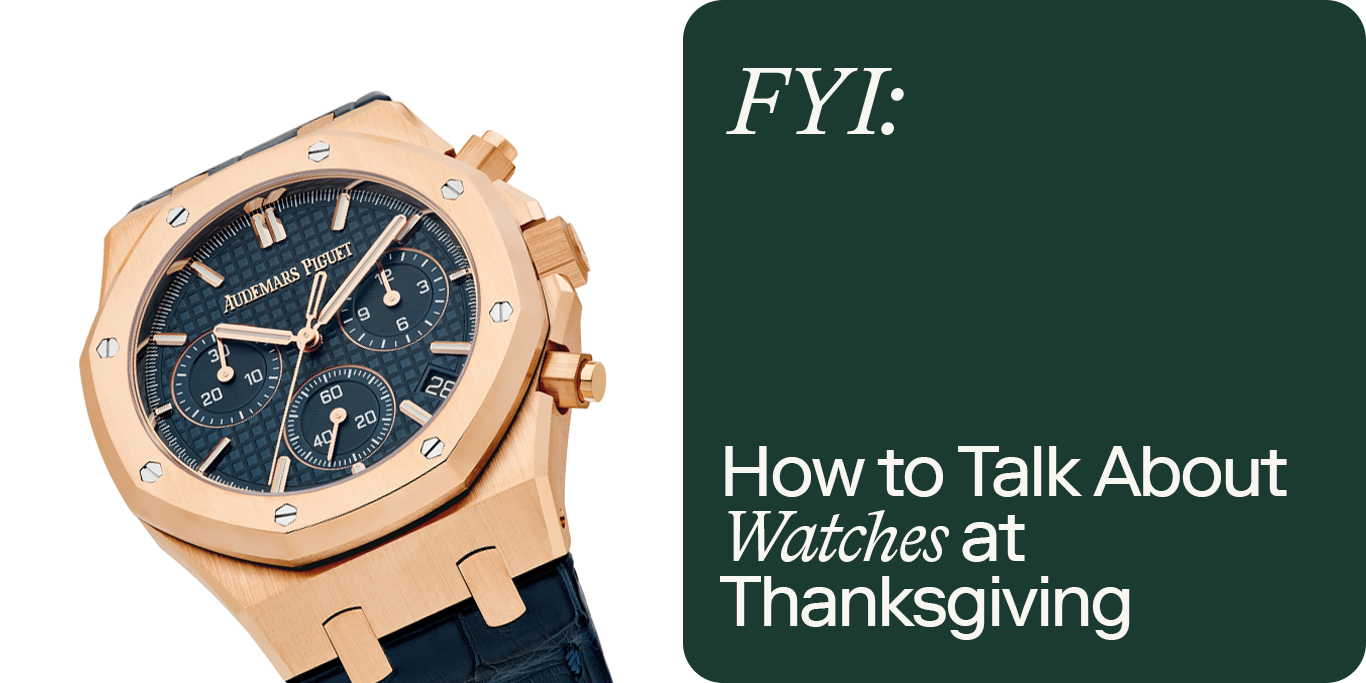 As much as Thanksgiving is all about reuniting with loved ones and giving thanks, it’s, really, an excuse to eat mashed potatoes seven ways, with the goal to be horizontal by 5:30 p.m. But if you ask us, it’s also the perfect opportunity to gently nudge the unsuspecting and uninitiated down the rabbit hole that is watch collecting — so we’ve prepared a few pointers to help you talk watches at the table.

Start With the Movement

Where They Can Buy Them

Watches are by no means a new phenomenon, but the enthusiasm around watch collecting today is greater and more diverse than ever. A great deal of this disruption comes thanks to a younger generation of collectors breathing new life into the age-old craft, helping firmly position top brands, iconic models, and notable collectors at the forefront of pop culture. Making matters all the more alluring is the fact that watchmaking itself has never been more creative and advanced, with futuristic designs that collectors of generations past could’ve never imagined. For all these reasons and more, it’s quite an exciting time to dive into the space.

Start With the Movement

Begin by explaining what a mechanical watch movement is, and how it functions. If you’re not yet sure, refer to our dictionary of watch terms, along with this cheat sheet:

Everyone is sure to be in awe of the notion that you’re telling time with the help of hundreds of beautifully finished, miniscule components. Should they have further questions regarding the accuracy of mechanical watches, assure them that you can expect a well made and maintained mechanical watch to reliably keep time, and if you can’t, its movement probably needs an overhaul.

Discuss how some watches boast additional functions apart from telling the time alone. These extra features are referred to as “complications” within watch collecting circles, and include chronographs, perpetual calendars, minute repeaters, and more.

Make it known that beyond turning heads and being an insane feat of craft and mechanics, watches have played important roles in many of history’s most significant events, including the first successful ascent of Mount Everest in 1953, the Moon landing in 1969, and the first dive to the bottom of the Mariana Trench in 2012. Having at least a dozen photos of your uncle’s favorite NBA player wearing watches will also help. And make sure to leave time for your grandma to chime in about all the places she wore her Cartier Tank.

Watch collecting isn’t exactly the cheapest hobby, but that doesn’t necessarily mean you’re reckless with your money or your budget. Affordability will no doubt come up in conversation, and here, you can take the time to explain that not all watches cost upwards of hundreds of thousands of dollars, and that you can often save money when buying a pre-owned watch instead of a brand new model.

Though it’s not advisable to approach watch collecting solely from a profit-generating perspective, address how vintage and modern luxury watches have undoubtedly proven themselves to be a true asset class with oftentimes enticing investment potential. This notion isn’t only demonstrated by the hype surrounding watch collecting in recent years and its impact on pricing, but the year-over-year appreciation of sought-after watches serves as proof of their  value. We promise this will be easier than trying to explain crypto.

Where They Can Buy Them

Your cousin and her new boyfriend might want to know how to buy an Omega, or whether to opt for something dressier, like a Cartier. Given the prevalence of counterfeit watches in today’s market, point them in the direction of Bezel, the authenticated marketplace that offers a curated selection of watches and assistance from some of the watch industry’s most respected experts. What more could you ask for when starting your watch collecting journey?